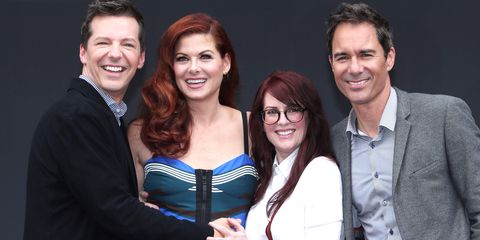 Amazing news for Will & Grace fans! The series has been renewed for a third season, before Season 1 has even finished.

The cast and crew announced the news at the 2018 Paleyfest in Los Angeles this weekend. The Chairman of NBC Entertainment, Robert Greenblatt, said of the news (via JustJared), "As far as I’m concerned, we can’t get enough of Will & Grace and 23 more episodes is music to my ears." If you love the show as much as he does, then it'll be music to your ears, too.

Greenblatt also said of the renewal news, "We’re eternally grateful that Debra, Eric, Sean and Megan feel the same way and wanted to keep this good thing going. I’m overwhelmed by the euphoric response the new show has received from the press and the audience."

Related Story
30 Facts About the Making of 'Will & Grace'

According to Variety, "NBC has upped the Season 2 order to 18 episodes, up from 13," as well as ordering an 18-episode third season. The network's commitment to the show is unsurprising, considering how successful the return of Will & Grace has been so far.

The classic show originally ran from 1998 to 2006. It was rebooted in 2017 off of the back of a ten-minute Will & Grace special about the 2016 election, which reunited the core four cast members. And since its return, the series has "averaged a solid 9.8 million viewers" (via Variety), proving that audiences love a TV reunion.

It looks like the Will & Grace reboot is sticking around.