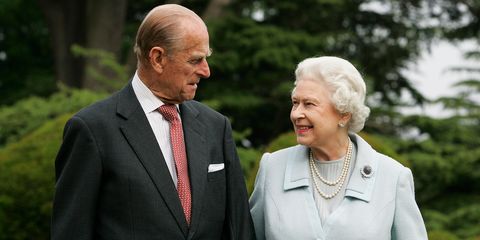 For 71 years, Prince Philip has been by Queen Elizabeth's side—and it seems almost impossible to think of a day when he might not be. Despite being alive and well, many people were concerned when the 96-year-old Duke of Edinburgh abruptly canceled his scheduled appearance at the Maundy church service last Thursday, reportedly due to a hip problem.

Last May, Philip made the decision to retire from his royal duties—which included ending his public appearances—so the church service would have been a rare outing for him.

According to Business Insider, Philip is the longest-reigning consort in British history, having accomplished 22,219 solo engagements since Elizabeth became Queen in 1953.

Now, with both the Queen and Prince Philip in their 90s, there is a lot of concern about the future of the monarchy. Should either of their deaths come anytime soon, Buckingham Palace is prepared with two very different strict protocols. Last year, The Guardian revealed the plan in place for when the Queen dies, known as "London Bridge is Down." But what's the protocol for when Philip passes?

1. How the public will find out

When the sad day comes, it's expected that the BBC will be the first media outlet given the news of the prince's death. If he passes in his sleep, the announcement will likely be made at 8 a.m. the following morning.

Prince Philip has already requested that people not make a "fuss" over his funeral and said it isn't necessary for his body to be lying-in-state at Westminster Hall—unusual considering the Palace of Westminster is always on a six-hour notice to prepare the hall for an event like this.

Philip is, of course, entitled to a large funeral as the Queen's consort. However, according to Parliamentary documents, there is no "official process" for "deciding when a state funeral should be held for a person other than the Sovereign."

Philip's body would not be open for public viewing, and the funeral would likely only include his family, friends, and heads of state from Commonwealth countries.

3. Where he will be buried

Upon his death, Prince Philip will be buried in Frogmore Gardens on the grounds of the Windsor Castle. The secluded 35-acres of garden are a royal family hidden gem. According to The Telegraph, "It’s where the Queen walks her corgis." Prince Philip even installed the dining room from the royal yacht, Britannia, at Frogmore House.

Since Frogmore is off-limits to the public, it's been a place for Prince Andrew's and Prince Edward's kids to play, and it's where George VI and the Queen Mother spent their honeymoon in 1923. Queen Victoria built a shrine to her husband, Prince Albert here, and she was buried next to him in a mausoleum.

Most other British royal family members have been buried in Westminster Abbey and St. George's Chapel, but it's likely Philip selected Frogmore Gardens because of its significance to his family.

4. How long the Queen has to mourn

If the Queen survives Philip, it is believed she will be expected to enter an eight-day period of grief, in which she will forgo her duties during that time. This means all state affairs and laws needing Royal Assent (a.k.a the Queen's approval) will be put on hold.

Giving Assent is one of the Reserve powers of the reigning monarch—he or she has the right to refuse a Parliament bill. However, it's unlikely that any monarch would veto a bill, as it hasn't been done since Anne, Queen of Great Britain refused the Scottish Militia Bill in 1707. Because of this, there are no set rules for who could give Assent in place of the Queen if she were in a period of mourning during an emergency.

5. When the Queen will return to her public duties

It's believed that after the Queen's eight work-free days, she'll continue her duties behind closed doors. Britains would then enter an official Royal Mourning period for 30 days, after which it's expected that the Queen would return to her public appearances and responsibilities.

Back when Queen Victoria was the reigning monarch, her husband, Prince Albert, died suddenly. In her time of mourning, she retreated to Balmoral Castle, where she spent the next 40 years in grief-stricken pain. Her permanent mourning almost led to the downfall of the British monarchy.

6. What will happen to the monarchy

Nothing will actually change when it comes to who is line for the throne—the order still remains, Prince Charles, Prince William, Prince George, Princess Charlotte, Prince Louis, and finally, Prince Harry. Royal family members' titles and positions will remain the same so long as Queen Elizabeth is alive and wearing the crown.

Related Story
Just 52 Royal Church Hats Through the Years
Alex Warner
This content is created and maintained by a third party, and imported onto this page to help users provide their email addresses. You may be able to find more information about this and similar content at piano.io
Advertisement - Continue Reading Below
More From Culture
Meet the Cast of Netflix's 'Virgin River'
Watch the Trailer for the New 'Euphoria' Special
Advertisement - Continue Reading Below
Zac Clark Could Be a 'Bach' Frontrunner
It's Been a Weird Year for 'The Bachelorette'
This Guy Is a Frontrunner on 'The Bachelorette'
Will There Be a Season 3 of 'Virgin River'?
Unique Gifts for the Coffee Lover In Your Life
Want a Spooky Read? Order 'Plain Bad Heroines'
Listen to These Sad Songs If You Need a Good Cry
'The Undoing' Season 2: Everything We Know