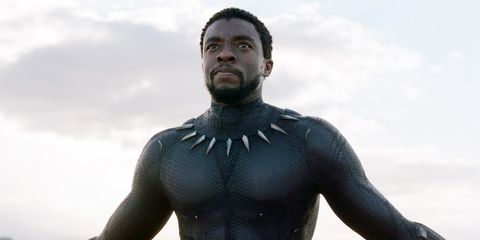 In less than two months, Black Panther has managed to make more at the box office than 1997's Titanic, which is more than a little impressive. As The Hollywood Reporter notes "Black Panther finished Friday with a domestic total of $659.3 million, just shy of the $659.5 million grossed by Titanic," easily surpassing that mark on Saturday.

Chadwick Boseman's unforgettable superhero performance still sits behind Star Wars: The Force Awakens, which made $936.7 million, and Avatar, which earned $760.5 million (via The Hollywood Reporter). Whether or not Black Panther will catch up to either of those record-breaking movies remains to be seen, but as no-one expected it to out-earn Titanic, it's certainly not an impossible feat.

Since before its release, critics noted that Black Panther is Marvel's most inclusive movie to date. Variety points out that the film's "diversity is not only racially inclusive, but representative of women and the LGBTQ community as well."

The impressive performances of female leads Lupita Nyong'o, Danai Gurira, and Angela Bassett definitely made the Marvel Cinematic Universe accessible to women in a way that previous superhero films hadn't.

Basically, Black Panther is proving that diversity can and does sell at the movies, and the latest box office figures make it clear that fans want more movies exactly like this.

Related Story
The 'Black Panther' Cast Won the Oscars Red Carpet
This content is created and maintained by a third party, and imported onto this page to help users provide their email addresses. You may be able to find more information about this and similar content at piano.io
Advertisement - Continue Reading Below
More From Culture
Dyland Arnold Is a Breakout Star in 'You' Season 3
'Virgin River' Season 4: Everything We Know
Advertisement - Continue Reading Below
Madi Prewett Shares Her Favorite Self-Care Books
'Only Murders' Is Getting a Season 2
Every 'Squid Game' Hint You Missed Along the Way
Meet the Cast of Netflix's 'Squid Game'
Listen to the Best New Love Songs of 2021 (So Far)
Shalita Grant Is Hilarious in 'You'
'Squid Game' Season 2: Everything We Know
Breaking Down the 'You' Season 3 Finale