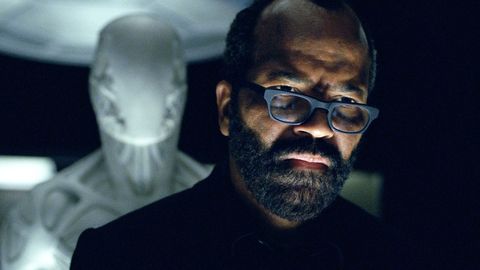 Westworld returned for Season 2 Sunday, and left us with more questions than answers. Fans are already diving deep into the theory game and, as usual, Reddit is the place to be to play a round of guess-what-will-happen-next-on-Westworld. This season, most of the theories really gaining traction center on Bernard, who featured prominently in the premiere and was super weird the entire time.

Here are the Bernard theories you need to know to keep up.

Theory 1: There are multiple Bernards.

This one is barely a theory—it's basically fact. Eagle-eyed fans spotted a quick image in the Westworld Season 2 trailer that shows Delos bigwig Charlotte Hale standing in front of three separate Bernard hosts.

Here's a screenshot, courtesy of Reddit user solomars, of the blink-and-you'll-miss-it moment from the trailer:

It's obviously not clear yet if all three of the Bernards are (or ever have been) in use, but they definitely exist and the screenshot indicates that Charlotte, at least, will probably learn the truth about Bernard's status as a host.

Other evidence that we've already seen more than one Bernard on screen this season include his outfit change between the scenes taking place directly after the massacre and those that take place about two later:

Even more telling is Bernard's disappearing scar. Last season, Bernard was shot in the temple, but later repaired and rebooted. As Redditor mikegcode points out, the scar from the gunshot is visible during the scenes that take place the night of the uprising, but mysteriously missing in the scenes that take place after Bernard wakes up on the beach.

Theory 2: One of the Bernards is a clone.

While the scene from the trailer seems to show three host Bernards, Reddit user morepicard theorizes that at least one Bernard might be a clone of Arnold or at least some kind of host/clone hybrid. Morepicard suggests that this might be why the version of Bernard who entered the bunker with Charlotte after the massacre was able to pass the Delos DNA test.

While in the bunker/lab with Charlotte, Bernard notices that Delos has been secretly collecting data and even DNA from its guests without their knowledge. This makes it seem very possible (in Westworld terms) that the company is experimenting with human cloning or at least genetics.

Of course, since the version of Bernard who enters the secret lab with Charlotte is the same version with a gunshot scar, it seems unlikely that he's not at least part host.

Theory 3: Bernard isn't interacting with Charlotte at all after the uprising.

At least one theory suggests that Bernard isn't with Charlotte at all during those pivotal scenes with the Delos exec. During the scenes in the underground lab, Bernard runs a diagnostic on himself that returns a list of critical failures, including time slippage, cognitive dissonance, and prosopagnosia.

As Reddit user romeoinverona points out, prosopagnosia is "face blindness." Specifically, the condition is the inability to recognize the faces of familiar people, usually as a result of brain damage. This means that Bernard's interpretation of reality in that timeline cannot be trusted.

Romeoinverona suggests that Bernard is actually with someone else, like Dolores or even Ford (or a Ford host). In a comment, Redditor smooshie pointed out that this could also explain the creepy, blank appearance of the host drones—they could be Bernard's copies and he's unable to see them for what they are because it conflicts with his programming.

This theory is perhaps the trippiest of all (which, considering this is Westworld, might also make it the most likely). The theory, from Reddit user BigbigPlibt, holds that Dolores has taken over Bernard's body as part of a plan to escape Westworld and begin her large-scale uprising.

"Delores [sic] might have noticed that it’ll be impossible to breach outside of Westworld with a small army and instead need to take a more stealth approach," the user suggests.

The premiere shows (several times, in fact) that hosts' brains can be removed. If that's the case, it seems plausible that one host's mind and memories could be transferred to another host's body.