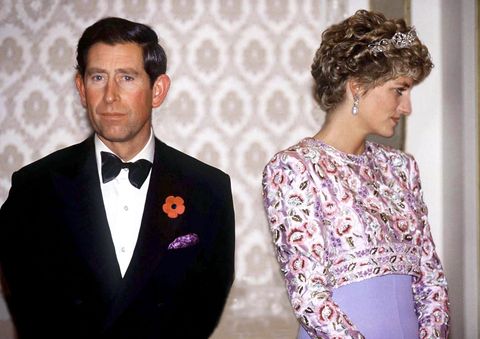 We know that several members of the royal family enjoy Netflix's The Crown, but how will they feel about a show that focuses specifically on one of the Windsors' biggest scandals? Hopefully we'll find out when Ryan Murphy's Feud: Charles and Diana is finally released. In the meantime, here's everything we know so far about the anthology series' latest season.

Feud, which tackled the infamous beef between Bette Davis and Joan Crawford in its first season, was officially renewed for a second cycle in February 2017—which, as anyone with a calendar and/or even a vague sense of the passage of time knows was a WHILE ago.

The second season was said to have gone into production in the fall of 2017 and, by all accounts, was scheduled to air sometime in 2018. “We are shooting I think in the late fall, and I’m casting Charles and Diana," Murphy told Deadline in April 2017.

However, in a more recent interview with Entertainment Weekly (from March of 2018), Murphy said he is "still talking about" season two, which suggests that it did not start filming in fall of 2017 and that the release date is still very much up in the air.

"We’re still deciding it," he said. "I have the new Netflix deal and I have all my shows with Fox, I don’t want to do something unless the scripts are ready and the casts are ready. I’m taking my time and just trying to get everything right."

The cast is also largely unknown. Murphy has gone on record saying there is "always" room for Susan Sarandon and Jessica Lange (Bette Davis and Joan Crawford in the first season, respectively) to return for future installments of the anthology, but he hasn't given any hints as to who they might play in Charles and Diana.

Murphy has denied rumors that his frequent collaborator Sarah Paulson will play Diana. More recently, rumors have swirled that Gone Girl's Rosamund Pike might play the late princess. No official casting announcements have been made to date, however.

One thing Murphy has shared about the series is the time period it will cover: Charles and Diana's divorce through her untimely death.

Executive producer Alexis Martin Woodall has also weighed in on the upcoming season, describing it as "a woman's story—she was was 19 years old when she married him, she really had to find her own way. With Charles and Diana, they were heightened, they were royalty—true royalty—and they still had the same issues of insecurity and relevance and importance and love that everybody goes through. I think there's a really human quality to it."

We also know that season two is set to have 10 episodes, up from eight for Bette and Joan. Stay tuned for more info—as soon as we have it, you'll have it.

Related Story
All the Times Meghan Markle Channeled Princess Di
This content is created and maintained by a third party, and imported onto this page to help users provide their email addresses. You may be able to find more information about this and similar content at piano.io
Advertisement - Continue Reading Below
More From The Ultimate Guide to the Royal Family
Will & Kate's Modern Approach to Raising George
Why Harry's Memoir Release Date Has Upset People
Advertisement - Continue Reading Below
The Royals Are Worried About Prince Harry's Memoir
Harry Is Putting the Queen in a Difficult Position
Are Will & Kate Sending a Message to Harry & Meg?
Harry and Meghan Reportedly Have a Four-Book Deal
Rare Photos From Diana and Charles' Wedding
Prince George Looks So Grown-Up in New Portrait
Whatever Happened to Archewell Audio?
Prince Harry Is Set to Publish a Memoir