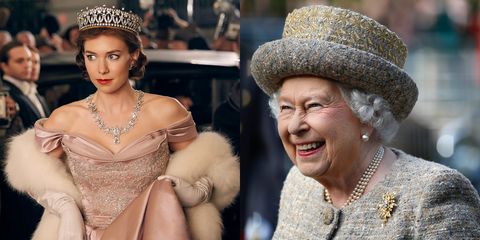 Netflix's drama The Crown chronicles the life and reign of current monarch Queen Elizabeth II. Rarely does a ruler have a chance to see the biopic version of their life—so what does Her Majesty think of being the inspiration for a binge-worthy show?

She's a big fan, according to Vanessa Kirby, who plays Queen Elizabeth's younger sister, Princess Margaret, in the first two seasons of the hit series. In a new interview on The Graham Norton Show, Kirby revealed that she has it on good authority that the Queen is fan of The Crown.

"A friend of mine was at a party where he didn’t know anyone, so sidled up to a group who were discussing the show," she said. "One of the women said, ‘My granny kind of likes it.’ It turns out it was one of the princesses—The Queen’s granddaughter. It’s quite a reliable source–ish–so I am sure she is a fan."

It's not clear who Kirby's source was, but it must have been Princess Eugenie, Princess Beatrice, or Zara Tindall. (Lady Louise Windsor is a bit young to be at a party.)

As for who convinced Elizabeth to watch the show, we have Prince Edward and his wife Sophie, the Countess of Wessex, to thank for that. A source told Express that the couple "love" the show and personally convinced the Queen to watch it with them.

"It has been a longstanding arrangement that they drive to Windsor at the weekend to join the Queen for an informal supper while watching TV or a film," the source said. "They have a Netflix account and urged her to watch it with them. Happily, she really liked it, although obviously there were some depictions of events that she found too heavily dramatized."

Princess Eugenie has also been open about watching—and liking—the show. So we think it's pretty safe to say that the Windsors love The Crown as much as the rest of us mere mortals.

Related Story
Everything We Know About 'The Crown' Season 3
Kayleigh Roberts Contributor Kayleigh Roberts is the weekend editor at Marie Claire, covering celebrity and entertainment news, from actual royals like Kate Middleton and Meghan Markle to Hollywood royalty, like Katie Holmes and Chrissy Teigen.
This content is created and maintained by a third party, and imported onto this page to help users provide their email addresses. You may be able to find more information about this and similar content at piano.io
Advertisement - Continue Reading Below
More From The Ultimate Guide to the Royal Family
A Look Back at Princess Anne's Life in Photos
A Look at Royal Family Portraits Through the Years
Advertisement - Continue Reading Below
Kate Had a Big Regret About Her Engagement to Will
An Attack Dog Once Mistook Will for an Intruder
The Queen Is Still Prince Harry's Mentor
Harry Was Homesick for a While, But Is Happy Now
Meghan Wasn't Appreciated for Royal Contributions
Harry & Meghan Have Had a Painful Year Since Exit
The Queen's Hot Grandnephew Is a Thirst Trap
Watch Diana Play Impromptu Piano in Rare Clip