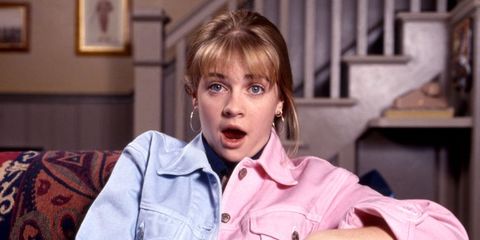 Clarissa Explains It All is the latest '90s classic getting the reboot treatment. The original series, starring Melissa Joan Hart, ran on Nickelodeon from 1991 until 1994 and launched Hart's decades-long career as a television staple.

In March 2018, Nickelodeon announced that a reboot of the teen sitcom was in the works. Here's everything we know about it so far.

As exciting as the prospect of a Clarissa reboot is, we don't know when we can expect to see it come to life just yet. Deals with Hart and original series creator Mitchell Kriegmanare are reportedly still in the works. A source close to the project told The Hollywood Reporter that the project is "in early development at Nickelodeon."

The only confirmed member of the reboot cast is Hart herself. She will reportedly reprise her role as Clarissa Darling, this time as the family matriarch. Boy Meets World took a similar approach when it returned to Disney as Girl Meets World in 2014 with the original cast playing their old characters as parents and plots that focused on their children's lives.

Hart hinted about a reboot back in February during an interview with The Hollywood Reporter.

"I like the way we left Sabrina. I think Sabrina ended on a really great note, and I don't think you want to go back and explore that. At the same time, I think Clarissa ended on a note that could be explored again, because it didn't really have an ending—it sort of ended," she said. (Hart's feelings aside, Sabrina IS getting a reboot, too.)

The Clarissa reboot will star Hart as her old character, Clarissa Darling, but this time as a mom with kids of her own. It's not clear how much of the plot would focus on Clarissa, but considering the show is set to run on Nickelodeon, it's safe to bet that the bulk of the show would focus on her kids—preferably a sassy, fourth wall-breaking daughter.

It's also worth noting that this isn't the first time there's been an attempt to continue Clarissa's story. The original series ended very abruptly and the creative team filmed a spin-off pilot about Clarissa moving to New York that was, tragically, never picked up.

This post will be updated as we learn more about the show.