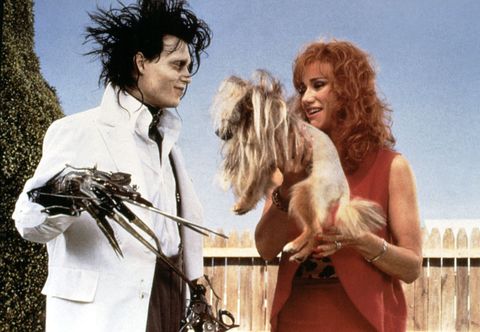 You've probably seen Home Alone and It's a Wonderful Life too many times to count in your youth, so when they've started to lose their charm as an adult, turn to some of these offbeat films that will keep you entertained and distract everyone *else* from discussing, say, the election.

If you haven't already seen this Johnny Depp and Winona Ryder classic (the same movie that gave us #WinonaForever), schedule a Christmas viewing ASAP. A scientist creates a boy made with scissor hands, but dies before completing him. After an Avon lady discovers and adopts him into her family, he falls in love with her teenage daughter. It's as fantastical and quirky as you would expect from any Tim Burton film, and the ice sculpture snow scenes are the dreamiest way to celebrate the holidays with your family.

When everything feels too sentimental or sappy for Christmas, find some light entertainment with the snobs of Whit Stillman's bourgeois comedy of manners. A sheltered, snooty group of upper-class Manhattanites have their world shaken up by a young man with a different worldview. The witty dialogue is perfect for an older family that outgrew the kid's flicks a long time ago.

Dysfunction takes center stage in The Family Stone, so it's a perfect way to feel better about your chaotic family gathering. Sarah Jessica Parker plays an uppity businessman who joins her boyfriend's diverse, free-spirited family at their annual Christmas celebration, and as you could probably guess, worlds collide. It's a rowdy family movie, but fair warning: it'll have you reaching for the Kleenex.

When Christmas calls for a black comedy, look into Robert Downey Jr.'s turn as a crook-turned-actor in Kiss Kiss, Bang Bang. There's enough action, suspense, and laughs to keep everyone awake long after dinner's over.

Though Bridget Jones' Diary always gets overshadowed by Love Actually in the British Christmas movies department, the former is still one of the most hilarious ways to ring in Christmas with the family. Consider the iconic ugly Christmas sweaters, uncomfortable Christmas dinners that could rival your own (blue string soup!), the epic snow scenes, and of course, the way says Renee Zellweger says "pervert."

One of the best takes on the age-old Scrooge story is Bill Murray's Scrooged, which sees him in ghost territory again as an inconsiderate executive who's plagued by figures from his past as he's putting together a production of A Christmas Carol. Bill Murray's at his most whimsical as he confronts his demons, and he makes this Debbie Downer script actually seem funny.

Family members who grew up with the original cast of Saturday Night Live won't mind memory-tripping with this hilarious comedy starring former cast members Eddie Murphy and Dan Akroyd. Akroyd plays an arrogant financial broker named who gets caught up in an experiment hatched by his employers, The Dukes. The Dukes have him thrown into jail and replace him with a homeless street hustler (Murphy), until the pair realize what's transpired and join forces to get their revenge.