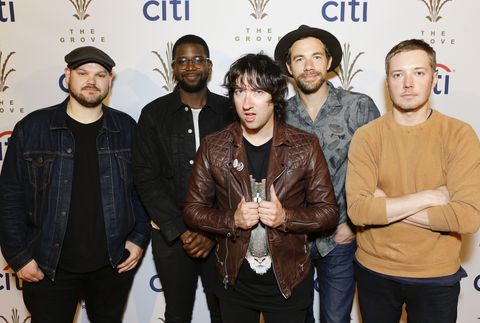 In 2005, Tom Higgenson of the Plain White T's promised Delilah DiCrescenzo that he'd write a song about her. From that promise, we got "Hey There Delilah," which was on Time magazine's Top 10 Songs of 2007, no. 1 on Billboard Hot 100 in 2007, and nominated for two Grammys in 2008 (Delilah herself accompanied the band to the Grammys).

Now, according to the Hollywood Reporter, the band is working on a script for a romantic dramedy TV series based on a long distance relationship between an NYC college student and a singer-songwriter.

Delilah spoke out about her relationship with Tom Higgenson in an article for ESPN. Here are some things y0u probably didn't know as you hummed this song and yearned for love in 2007: She is a professional runner; she was—and still is—in a serious relationship when she met Tom; they're both from the Chicago area and Tom dropped a CD with the song at Delilah's front door; they met at the House of Blues in Chicago and messaged on AOL Instant Message for years after.

The show is still being written and pitched, meaning a network may pick it up. I have faith in this long-distance love story between two people who barely know each other, one in a serious relationship with someone else...right?

Related Story
Required Listening: The Best Love Songs of 2018
This content is created and maintained by a third party, and imported onto this page to help users provide their email addresses. You may be able to find more information about this and similar content at piano.io
Advertisement - Continue Reading Below
More From Culture
Is Jack From 'The Circle' Cousin Greg?
Cristin Milioti & Billy Magnussen Play Trivia
Advertisement - Continue Reading Below
The Most Unmissable Movies of 2021 (So Far)
Mother's Day Gifts to Show How Much You Miss Her
Get to Know Delessa From 'The Circle'
Movies That Just Feel Like Summer
Different Pride Flags and What Each Represents
Get to Know Courtney From Season 2 of 'The Circle'
Why 'Fearless' Hits Different in 2021
'The Circle' USA Is Actually Filmed In the U.K.