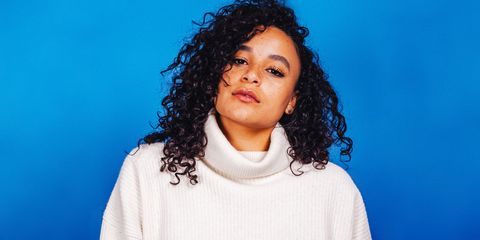 Just before midnight on April 6, Drake dropped the video for his second single, "Nice for What," from his new album, Scorpion. Issa Rae, Olivia Wilde, Tiffany Haddish, Rashida Jones, Zoe Saldana, Letitia Wright, Tracee Ellis Ross, and Yara Shahidi were just a few of the iconic women who starred in the four-minute-22-second feel-good video, laughing, swimming, modeling, and "joy dancing" (as Ross famously calls it) to the rapper's empowering female anthem. For a music video that took just short of a month to produce in "a race against time," it was mesmerizing. It was also, frankly, surprising to witness 16 powerful women's stories and personalities come to life in less than five minutes. The most fitting element of the girl power theme, however, is the director who brought it to life: 22-year-old Karena Evans.

Evans and I connected instantly. As millennial women in our early 20s, we’re often labeled “very young” (in a condescending way); when I told her how inspired I was by her craft—taking traditional music videos and transforming them into short films—and referenced our one-year age difference, she immediately understood what I meant. “I used to lie about my age, so I often forget I’m 22. You know how it is," she says to me over the phone. "We have to stick together. There’s such a false perception about millennials and young women. I just kept that a little secret for a while."

A secret it most definitely is no longer. Before "Nice for What" (a career highlight for Evans), she directed the BET award–winning Video of the Year, "God's Plan," released in February. Yes, that emotionally-charged, beautiful music video in which Drake paid for the groceries of Miami supermarket shoppers, gave scholarship money to University of Miami students, and surprised strangers on the street with his refreshingly normal presence despite just so happening to be one of the most beloved rappers in the world. It was the first video in a long time that didn't actually feel like a music video. It felt like a story, and that was the point.

"My first service is to the artist and the brand, but at the same time we are at such a pivotal point in humanity and society when stories are so important—whether that’s a music video, a 30-second commercial, or a feature-length film," she says. "As artists, we have a responsibility to tell important stories because we need [them] right now. And that’s what we’ve done in these music videos."

Evans (second from right) and her crew on the set of Drake’s "God’s Plan" at the University of Miami.
Dean Rosen

Evans grew up in Pickering, Ontario, a town right outside of Toronto. She calls Toronto—the same Canadian city Drake was born and raised in—a "multicultural, vibrant place that really inspires you to open your mind if you let it do so." Perhaps that's why when you ask her about her passion for directing, filmmaking, and acting, she repeatedly comes back to the heart of its existence: storytelling.

Evans on the set of Drake’s "God’s Plan."
Dean Rosen

"I was the annoying kid who put on plays for my family and forced my little brother to do [them] with me. I made everybody come into the living room and watch," she recalls. "Anytime a birthday would come around I would put together these videos and pictures of their life. I didn’t realize at the young age that it was storytelling. It just further developed as I continued to grow and went to school for it. The more I practiced it, the more I realized I can actually make a life out of telling stories."

Evans enrolled at Toronto's Ryerson University, but made the decision to drop out while interning for her now-mentor, acclaimed Canadian film and music video director and producer Director X. After just a couple months at his Toronto-based Popp Rok production company, she realized she was learning at a rapid pace—way faster than she ever could in a classroom. That was three years ago.

"I took the risk and dropped out of film school. I was creating pitches and treatments on-set with [Director X] and learning so much because I was actually in that environment. Shortly after, they offered to sign me on as a full-time director, so I think it was a good decision," she laughs. "I truly do believe in education, but everybody’s journey is different and I needed to learn in a different way. For me, that was working directly in the field. I needed to be thrown into it."

When she dropped out, she had the support of her family—key for her—including her older brother, who has also found success in the music industry. Most people don't know she's related to Jordan Evans, the 27-year-old producer who has worked with artists including Jay Z, Eminem, and Childish Gambino, and currently manages R&B singer and songwriter Daniel Caesar. Evans says her brother inspired her to take the risk, work hard, and persevere after making such a life-changing decision, but she never wanted the family connection to influence her career path. Instead of receiving special opportunities and becoming known as her brother's "younger, annoying sister," she would make it on her own. And that she did.

"I hope in the same way that women have made it a little bit easier for me to have a seat at the table, I’m also inspiring other young black girls from Toronto to do the same thing."

Before she worked with Drake, Karena directed Canadian rapper Belly's music videos "Mumble Rap" and "The Come Down Is Real Too," along with R&B singer PLAZA's "Run This." This year alone, she has directed six music videos from big-name artists: Drake's "God's Plan," "Nice For What," "I'm Upset," and "In My Feelings," Sir's "D'Evils," and SZA's "Garden (Say It Like Dat)" ft. Childish Gambino. All were praised for brilliantly highlighting the video's characters, in addition to the cinematic visuals.

I think the greatest asset Karena Evans has brought to Drake’s videos, is that she captures the people he’s featuring in his videos as they are. Be it celebrity women or city locals.

it’s bc karena evans has been directing them all lately, a whole black girl, a whole genius https://t.co/wT8OV09Pww

In February, Evans became the first woman to win the Prism Prize's 2018 Lipsett Award, which celebrates the best in Canadian music, for innovative and unique approaches to music video art. Once "God's Plan" went viral and the words "A Film Directed by Karena Evans" made its way across millions of screens—785,386,703 to be exact—she became an inspiration for other young women, particularly young black women, to pursue their creative dreams.

"I didn’t really notice my influence until Director X was like, 'You know what, you’re a hero for young girls.' And I’m like, 'What? What am I doing?' It comes with a great responsibility to make sure that I’m putting forth the best story and saying the right things and being a positive influence," she says. "I hope in the same way that women have made it a little bit easier for me to have a seat at the table, I’m also inspiring other young black girls from Toronto to do the same thing. I don’t think it’s something I’m doing by myself, though—there are countless women who are doing it with me. I want us all to inspire the next generation."

Evans working on the set of Drake’s "Nice for What."
Kat Webber

When stars like Yara Shahidi and Olivia Wilde are suddently calling you, respectively, "a woman I admire" and "an incredible 22 yr old wunderkind badass," it's expected that the perception of yourself starts to change (she attended the VMAs earlier this week, too, but exited empty-handed). But not for Evans. She remains the same at her core—a self-proclaimed "weirdo" who enjoys watching movies, and feels incredibly grateful to her fans for "watching these videos and hearing my voice and letting me know I have one."

Karena doesn't get "tripped out" or "scared" working with artists like Drake and SZA, either, describing them as "extremely special people." When she collaborates with them, she becomes even more motivated to tell the best stories. (She's currently inspired by the artist H.E.R., whom she describes as "an old soul," "timeless," and "a brilliant storyteller through her music.") However, like any 22-year-old, she's yet to master the complicated concept that is work-life balance.

"I’m still trying to figure out the balance of sleeping and being a human and not working 24 hours a day," she says. "The more time you put into the craft, the more you learn about it and about yourself and about stories. I definitely am wired to always want to be working, whether that’s in the pre-production phase where I'm prepping and planning and writing, in the shooting phase, or in that post-production phase where I'm wrapping everything up." The work won't be stopping anytime soon: Evans is planning to make the crossover to film and TV (maybe with Drake and Zendaya?).

Her biggest piece of advice for aspiring directors? Do the work.

"You’re already a storyteller. It doesn’t matter what you’re getting paid, if you’re getting paid at all. If you love what you do, put in the hours to learn and to master that craft. That’s going to make the difference. Whether that means in school, watching hours of videos on Vimeo, but especially—if it’s directing—going out and shooting, learning everything that you need to do. You might make a couple shit videos to start, but then you’ll land on that good one."

Related Stories
Watch: Drake's Star-Studded 'Nice For What' Video
Required Viewing: The Best Music Videos of 2018
Rachel Epstein Associate Digital Editor Rachel Epstein is the associate editor at Marie Claire, where she covers culture, lifestyle, and politics.
This content is created and maintained by a third party, and imported onto this page to help users provide their email addresses. You may be able to find more information about this and similar content at piano.io
Advertisement - Continue Reading Below
More From Deep Dives
Teleabortion: A Bitter Pill
Indigenous Reindeer Herders Fight for Their Rights
Advertisement - Continue Reading Below
Hark! The Herald Dolly Sings
Presented by
American Greetings
Season’s (and Other...) Greetings
The Global Fight for Black Lives
Marvelous Women
To Save Victims, We Must Dismantle Purity Culture
How the World Fell Madly in Love With ‘DDLJ’
The Good Husband
The State of Gabrielle Union