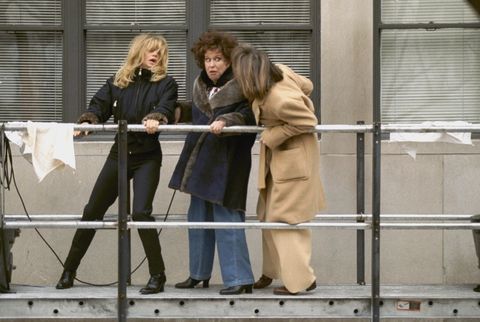 There’s a star-packed cast and then there’s the 1996 comedy classic The First Wives Club. From the three leading ladies to the supporting characters, this film is start-to-finish “Oh wow, she's in this too?!” Even the actors who, at the time, weren’t quite A-list (hello, Sarah Jessica Parker) are now casual cultural icons. On top of that, it’s an hysterical and empowering film about three women who come together around a common issue: Their husbands left them for younger women. And what better time to revisit this movie for Recasted, than with the casting for the recently-announced First Wives Club TV series still to be revealed?

Some people throw around the word “iconic” these days (it's me, I do that), but let's be clear: Any film that ends with a song-and-dance number in matching white suits is iconic. So who would be able to take the spot of the original Holy Trinity today? Let’s find out!

In the name of the Midler and the Hawn and the Keaton, amen.

While they aren’t spitting images (mainly because Diane Keaton has truly paved her own path, vibe-wise, and is matched only by the Babadook) Eliza Coupe’s ability to go from zero to endearingly-flustered in seconds is #PeakKeaton. Her time on
Happy Endings as the hysterical, Type-A Jane showed this talent off perfectly, and I think it’s definitely time to bring her skills to a larger screen.

If you haven’t watched Difficult People on Hulu, we probably don’t know each other in real life because I’m pretty sure I’ve forced even the people who deliver my Seamless to sit down for an episode or two. It’s perfect comedy programming (may it rest in peace), all thanks to Klausner’s genius as a writer and performer. She's the heir apparent to Funny Bette Midler, with old school flair and a joke-per-minute count that will leave you breathless. I’m already imagining the hilarity of whatever her “I beat Meryl!” equivalent is (a phrase that Jennifer Lawrence did not coin).

Before we begin, I need to beg all of you to go follow Goldie Hawn on Instagram immediately if you don’t already. The majority of her posts document her love of family, beach vacations, and being a grandma, and it is truly life-affirming every day. Okay, speaking of her family, I think this role should stay in the bloodline and go to her daughter and Romantic Comedy Princess, Kate Hudson. The hardest part of this role for Kate? Probably playing an aging actress, since she (at 39) hasn’t aged at all.

An older, wiser, bitterer woman who loves to make a mess and get revenge? This shouts Lucille Bluth. She loves to meddle and can make a facial expression funnier than any line in a script. And while that might just be her character in Arrested Development, Jessica Walter embodies the conniving matriarch of the Bluth family so convincingly that it's hard not assume she'll do the same to Gunilla.

Besides being a music mastermind, the Sweetener singer has been stanning her belief that First Wives Club is a classic for years:

Who better to play a young airhead than someone who's already played a young airhead—even if it was for Nickelodeon’s Sam & Cat? Through her Instagram stories we’ve seen that she’s down to clown, so why not start the #GrandeGoldenGlobe bandwagon now? It’s only a matter of time before Ariana makes her venture back into the acting world at a more-adult level, and a supporting role like this is the perfect reintroduction.

Bonus: Who would sing the remade "You Don't Own Me," the film's iconic dance number?

This is not the last Ariana Grande reference you'll read in this series, but I feel like her take on Lesley Gore would bring a lively, modern twist to it while also honoring its feminist message. Besides, it’ll be nice to have a different reintroduction to the track than the one we were disgracefully given a few years back. Keep G-Eazy away from this song!

More Movies We Want to Recast
Who Would You Put in a 'Titanic' Remake?
This content is created and maintained by a third party, and imported onto this page to help users provide their email addresses. You may be able to find more information about this and similar content at piano.io
Advertisement - Continue Reading Below
More From Culture
Zoe Kravitz Claps Back at Critic of Her Met Dress
Meghan and Archie Bake a Cake for Harry's Birthday
Advertisement - Continue Reading Below
Wild and Completely Iconic Vintage Porn Films
The New Horror Movies That'll Leave You Breathless
Movies Everybody Should Watch At Least Once
'Bridgerton' Season 2: Everything We Know
We're Getting a Season 4 of 'Manifest'
Here's When 'Succession' Season 3 Is Coming to HBO
The 18 Best Action Movies of 2021 (So Far)
Get to Know Nick From 'The Circle'