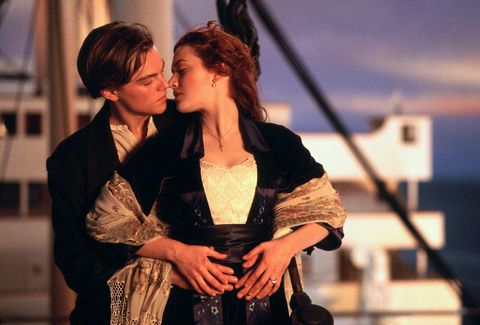 To kick things off, let’s tackle Titanic. Movies really don't get bigger than this: Though it was, at the time of its 1997 release, one of the most expensive movies ever made (with whopping $200 million budget), its box office-smashing brought in nearly $2 billion worldwide and it took home an insane 10 Oscars that year. (But none for you, Leo. In fact, you’ll have to wait almost 20 years for that honor.) Those numbers—and the fact that it remains, somehow, one of the biggest cultural touchstones of all time—means it is positively ripe for the remakin’.

Though it’s original cast was stacked—Young Sexy Leo! Beautiful Kate!—it’s interesting to think who could be cast now and put on a similar career trajectory to those two now-megastars. Also, I was already thinking about this movie because of that killer Ariana Grande and James Corden medley.

My heart will go on...and so could this franchise.

Not only is Timmy’s stardom the 2018 Tumblr-heartthrob equivalent of Leo’s
Pre-Y2K domination, but Chalamet’s got the talent, the aw-shucks charm, and the incredible head of hair to make an audience fall in love with him upon the first scene. Honestly, whoever styled Leo’s hair in the original deserves an Oscar of their very own.

I mean, Ronan and Chalamet are basically the golden children of Hollywood right now, and on top of that, they’re friends in real life. We’ve seen their chemistry together (ironically, through their characters’ lack of chemistry) in Lady Bird, but I feel that giving these two center stage in a true-form romantic movie will give everyone the feels. Alternate title: Lady Bird On a Boat.

The certified villain of Titanic (aside from the iceberg, I guess), Cal serves as the foil to all of Jack’s lovable qualities. He's rich in money but poor in personality, he’s the natural pick for Rose and yet lacks heart (and, until this recasting, a formidable career as DJ Ansolo). Though he hasn’t really been given the chance, Elgort seems like he’d have the range to embody rich-guy smarm very well. Something about his face just screams, “I was wealthy in the early 1900s!”

She is unsung! Give her a role in Titanic: Redux! While we’ve mainly seen Preston in more comedic-quirky roles (The Good Wife, Claws, one of the wild-child cousins in My Best Friend's Wedding), every move she makes in a scene has an element of classic, powerful acting talent—understandable, since she has a degree from Juilliard to her name. And I know what I’m talking about here because I have a rewards card to the Pinkberry located near Juilliard's campus, so.

She’s got the face-acting chops to play a mix of concerned and ruthless. Plus, her character in Claws has a very similar storyline to the Bukaters (losing their money), and let me tell you: She plays fake rich very well.

Recasted: One of Betsy Devos’s yachts

She certainly has enough of them.

BONUS: Who would sing the remade “My Heart Will Go On,” the film’s iconic theme song?

What could possibly make you choke up more than Celine’s version of this song? I’m not sure it’s humanly possible, but if anyone could push that boundary it’s Adele. In Adele’s hands, “My Heart Will Go On” would achieve peak schmaltz, but Adele would keep it grounded and modern at the same time. This one is a no-brainer.

Related Story
The Alternate Ending to Titanic Is Laughably Bad
This content is created and maintained by a third party, and imported onto this page to help users provide their email addresses. You may be able to find more information about this and similar content at piano.io
Advertisement - Continue Reading Below
More From Culture
'Ginny & Georgia' Season 2: Everything We Know
'Bridgerton' Season 2: Everything We Know
Advertisement - Continue Reading Below
The Best Feel-Good Movies to Curl Up With
'Shadow and Bone' Season 2: Everything We Know
Will There Be a Season 3 of 'Virgin River'?
The 'Younger' Cast Plays Trivia About Each Other
The K-Movies on Netflix You'll Be Hooked On
The 12 Best Action Movies of 2021 (So Far)
Ready for a Good Cry? Try a Korean Romance Movie
The Most Eagerly Anticipated Horror Movies of 2021