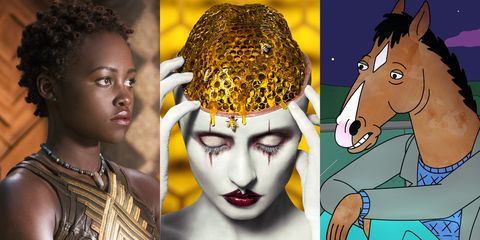 Here at MarieClaire.com, there's no shortage of opinions, from best lipstick shade to oatmeal raisin cookies (are they good or not?) to who the best Spice Girl is (Sporty. It's Sporty). There's no topic unworthy of debate in this office, which is why, instead of merely recommending things to each other, we decided to put our heads together and assemble a great list of what’s good and new on Netflix this month. Because while we may have differing opinions on many things, the editors at MC are all prolific TV binge-watchers.

Here are our picks for the best stuff on Netflix in September:

This limited series from Carey Fukunaga (mastermind behind the first/only good season of True Detective) brings Emma Stone and Jonah Hill back together—remember their romance in Superbad? It's the stuff of teen dreams—for a trippy, world-hopping, futuristic drama about a treatment facility that hacks people’s brains. I will probably pretend that I'm going to space out my viewing but then accidentally watch every episode in one sitting. Whoops. —Cady Drell, Culture Editor

This biographical documentary follows the life and career of iconic music producer Quincy Jones. Jones is known for having the best stories, which means there will be so many music industry truth bombs dropped. I can't wait to pick my jaw up off the floor. The doc is co-directed by his daughter Rashida Jones which, obviously, yes. It's set to premiere September 21. —Krystyna Chávez, Social Media Editor

Magic for Humans (Out Now)

Do you like comedy? Feelings of shock and awe? Watching other people experience feelings of shock and awe? MAGIC? Then let me recommend Justin Willman's new show, Magic for Humans. The Netflix original series is fun and funny and will have you googling "How did Justin Willman pull his wife out of a bag?" in under two episodes. (And if you figure out how he did it, please @ me.) —Sally Holmes, Digital Director

I have a love-hate relationship with AHS, in that I either love or hate each season. Murder House and Asylum were critically well-received, but I couldn’t stand them. Roanoke was sniffed at by critics, but I enjoyed every damn second. (We can all agree on Coven, though. Coven is magical.) Cult hasn’t been met with critical acclaim, exactly, but it doesn’t seem like anyone really hates it either. I can’t wait! —Jenny Hollander, Deputy Editor

If you’re not watching this satirical cartoon about a washed-up 90s sitcom star trying to restore his career glory—who also happens to be a anthropomorphic horse—you’re doing Netflix wrong. Seriously, this show is one of the best depictions of life with mental illness and coming to terms with not living up to your ideal potential that's ever aired. But its real magic is in how it manages to be profound and laugh-out-loud hilarious at the same time (one episode is entirely a chicken-or-the-egg joke). Plus, it's full of call-backs that warrant multiple viewings. It’s the only show that leaves me both sobbing on the floor and rolling on the floor laughing . —Amanda Mitchell, Editorial Fellow

The Breakfast Club is one of those classic movies almost everyone has watched except me. I’ve been brushing it off because these days all I watch are anime (I blame my boyfriend) or reruns of Law and Order: SVU. So when I saw The Breakfast Club was coming out on Netflix in September, I figured it must be a sign: I finally have to watch it. While I’m not completely sure what it’s about (a group of friends in high school?), I do know it’s a coming-of-age movie, which is a genre I love. I’m going into this film with zero expectations, guys. —Marina Liao, Fashion Editor

I have seen this movie dozens of times. Like, shamelessly, I fell asleep to this movie for at least a year in college. There’s a GIF of Lilo saying, “Leave me alone to die,” that I use—at minimum—twice a month. And I can’t hear “Ohana means family” without feeling all of the emotions. All of them. —A.M.

Sierra Burgess Is A Loser (September 7)

Okay, so the title is a little messed up, but doesn't it take you back to high school? A time when "loser" was the ultimate insult and you could pretty much do whatever you wanted. Sierra Burgess Is a Loser stars Shannon Purser (a.k.a Barb from Stranger Things) and Noah Centineo (a.k.a. hottie Peter Kavinsky from To All the Boys I've Loved Before). Sierra kind of catfishes a jock and is torn about whether she should tell him or just let him fall more in love with her—a modern love debate, tbh. Sierra will befriend the popular girl, but will she get the guy? And more importantly, will she figure out who she is? TBD but I can't wait to find out with a bottle of wine and great take-out. —K.C.

There should be a specific Google alert set up for when a classic rom-com starring any of the following, Hugh Grant, Sandra Bullock, Meg Ryan, Tom Hanks, or Julia Roberts, is added to a streaming service. This one stars Grant and Bullock in a cute workplace rom-com, so consider this your alert right now.—C.D.

I may be the only person on the planet who hasn’t seen the highly-praised Black Panther yet (blame crowded NYC movie theaters, even at 10 a.m.), so this is obviously the first movie I’m going to watch next month. Props to Netflix for making it available to stream so quickly after its release date. —Rachel Epstein, Assistant Editor

A classic. A classic! Do I remember what it’s about? No. What I do recall is loving every second of this in the theater aged 10, and re-watching it a couple years later with my younger siblings to find that, to my joy, it holds up. And Eartha Kitt is in it! —J.H.

Lessons From A School Shooting: Notes from Dunblane (September 28)

As a Brit who is confused and horrified in equal measure by the American epidemic of school shootings, this is on my must-watch list. Dunblane was the only major massacre by gun in the United Kingdom in recent history, and it forced an onslaught of gun control legislation that stopped something like it from happening again. That didn’t happen in America with Columbine, obviously. I want to know why. —J.H.

I love witchy shit, and this slow-burning and deeply creepy horror movie is about as witchy as it gets. It follows a hyper-religious family in 163os New England who, exiled from their colony, isolate themselves in the woods where they confront unimaginable evil. It was one of the buzziest horror movies of 2016, terrifying in the kind of bone-chilling way that follows you all day. But one of the leads is a beautiful demonic goat so, yes, I will be revisiting it when it's on Netflix. —C.D.

Chef’s Table is the most gorgeous show airing right now. I want to project Chef’s Table on a wall because you don’t need to listen to the show to appreciate it. It will make you want to cook, because everyone wants to feel like they can create art like that. I fully recommend eating a huge plate of pasta while watching this show, and putting your credit card away because it will make you want to travel to these places to go to these restaurants. Enjoy responsibly. —A.M.

Related Story
The Best Romantic Movies for Every Vibe
This content is created and maintained by a third party, and imported onto this page to help users provide their email addresses. You may be able to find more information about this and similar content at piano.io
Advertisement - Continue Reading Below
More From Culture
'The Crown' Season 4 Is Coming So Soon
Watch the Emmy-Nominated Michael Jordan Doc
Advertisement - Continue Reading Below
Watch These Ghost Movies at Your Own Risk
'Haunting of Hill House' Will Return Soon
Where You've Seen the Cast of 'Away' Before
Fans Are Clamoring for a Second Season of 'Away'
It's Been a Weird Year for 'The Bachelorette'
Fans Are Speculating About This 'Bach' Contestant
16 Books by Latinx Authors We Can't Put Down
30 of the Best Sex Podcasts