The latest Disney animated classic to get the live-action remake treatment is Aladdin and the studio has finally released a first look at the movie.

Much like its animated-to-live-action predecessor Beauty and the Beast, the live-action Aladdin remake appears to be a shot-by-shot remake of the original, at least based on the teaser trailer Disney released on Thursday.

The live-action adaptation of Aladdin has been in works at Disney for a while and the production has already had its share of controversy. In September 2017, the studio was hit with criticism following the announcement that a white character, named Prince Anders and played by Billy Magnussen, had been added to the live-action remake (which is, of course, proof that it won't be an exact copy of the animated film). Twitter reactions to the casting announcement were fast and, in many cases, harsh.

Will Smith, who is playing the Genie, taking over the iconic role originated by Robin Williams in the 1992 classic, posted the first photo from the new movie's set in September 2017. And, we have to be honest, it looks like the cast is having a blast putting the movie together:

"We just started shooting Aladdin and I wanted to intro you guys to our new family," Smith captioned the photo on Facebook. "Mena Massoud/Aladdin, Naomi Scott/Princess Jasmine, Marwan Kenzari/Jafar, and I’m over here gettin my Genie on. Here we go!"

Watch the first teaser trailer for yourself below: 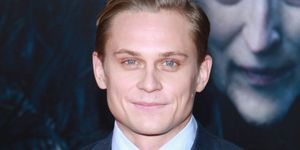 Twitter Reacts to Disney's New Aladdin Controversy
This content is created and maintained by a third party, and imported onto this page to help users provide their email addresses. You may be able to find more information about this and similar content at piano.io
Advertisement - Continue Reading Below
More From Culture
These Goats Could Help Save California
Zoe Kravitz Claps Back at Critic of Her Met Dress
Advertisement - Continue Reading Below
Meghan and Archie Bake a Cake for Harry's Birthday
The New Horror Movies That'll Leave You Breathless
Wild and Completely Iconic Vintage Porn Films
Movies Everybody Should Watch At Least Once
'Bridgerton' Season 2: Everything We Know
We're Getting a Season 4 of 'Manifest'
Here's When 'Succession' Season 3 Is Coming to HBO
The 18 Best Action Movies of 2021 (So Far)