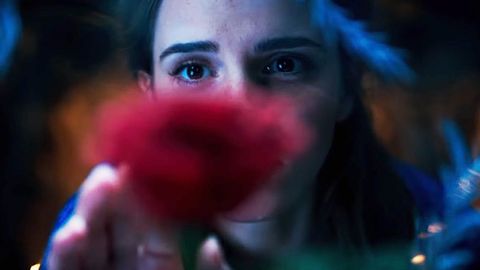 Anticipation for Disney's live-action remake of Beauty and the Beast is high. The cast is incredible: Emma Watson as Belle, Ewan McGregor as Lumiere, Emma Thompson as Mrs. Potts, Ian McKellen as Cogsworth, Josh Gad as Le Fou — the list goes on.

When Disney released the first teaser trailer for the film back in May, the internet buzzed with excitement and just a little disappointment. Yes, the trailer was hauntingly beautiful (and an impressive shot-by-shot recreation of the trailer for the 1991 animated feature), but it gave us very little insight as to what a live-action version of the film's world would look like.

Specifically, we were all wondering how some of the characters (you know, like the ones who happen to be enchanted pieces of furniture) would look.

Now we know. Disney has released a few new images from the film that highlight some of our favorite characters. There's this one of Lumiere and Cogsworth that has completely captivated our imaginations:

And this one that gives us a peek into Gaston's tavern:

And as a bonus, here's a first look at Dan Stevens as the Beast (in human form), thanks to the glory of Twitter:

We hope Disney will give us several more sneak peeks before Beauty and the Beast opens March 17, 2017.

Kayleigh Roberts Kayleigh Roberts is the weekend editor at Marie Claire, covering celebrity and entertainment news, from actual royals like Kate Middleton and Meghan Markle to Hollywood royalty, like Katie Holmes and Chrissy Teigen.
This content is created and maintained by a third party, and imported onto this page to help users provide their email addresses. You may be able to find more information about this and similar content at piano.io
Advertisement - Continue Reading Below
More From Celebrity
J.Lo Made Out With Ben on IG for Her 52nd Birthday
Are Will & Kate Sending a Message to Harry & Meg?
Advertisement - Continue Reading Below
Harry and Meghan Reportedly Have a Four-Book Deal
Naomi Osaka Lit the Olympic Cauldron in Tokyo
John Legend Performed "Imagine" for the Olympics
Simone Biles Is Honored With Her Own GOAT Emoji
Kate Winslet Reveals Her Favorite Red Carpet Look
Margot Robbie Had a Life-Size Cutout of John Cena
Jennifer Lopez and Ben Affleck Are IG Official
Celebs Share Their Emotional Infertility Stories