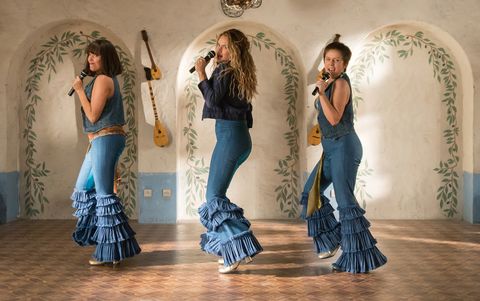 You know when you think you have friends that care for you, only to realize you’re wrong—completely wrong? Well, that happened to me on the subway today when a shocking revelation occurred to me: Mamma Mia! 2: Here We Go Again—the gospel, my beacon of hope during this terrible year, my “person”—wasn’t nominated for a Golden Globe. Not a single one. And no one thought to break it to me.

If you, like me, spent most of last week caught up in Oscar Host drama and more obvious award show snubs (Nicki Minaj fans are my entire Twitter feed, I guess) you might have also overlooked this terrible injustice. But now you can ask yourself: Where Were You When You Found Out Mamma Mia 2 Wasn’t Nominated For A Single Golden Globe?

For me, it was while I was blasting the incredible Mamma Mia 2 sleeper hit “Angel Eyes” on my commute, as I’m wont to do—it was one of my top five most played songs on Spotify this year, after all. But right after imagining Christine Baranski’s phenomenal high kick in that scene (find it at the 00:17 mark), I had the thought: Isn’t it weird how no one has talked about Mamma Mia 2 since the Golden Globes were announced?

That’s when it fully hit: Wait, was MAMMA MIA 2 not nominated for a single Golden Globe?! I went through all the stages of grief—denial was me desperately searching for service on the A train to see if it got at least a Best Score nod or something—until it finally sunk in. Lily James was snubbed. Christine Baranski was snubbed. Idyllic Amanda Seyfried? Snubbed. THEY EVEN DID CHER DIRTY. The movie I ran to opening night after consuming four to seven vodkas, the movie that I cried three times during and sang along to truly every song...is getting nothing.

And it’s not like this was to be expected! The first film, Mamma Mia, got two nominations. One was, of course, for Meryl, who will one day have climbed every mountain except the Emmy for Best Shopping Cart Wheeler On A Target Security Camera.

Despite this personal-and-professional attack, I still have hope that the Oscars will right this wrong and let it sweep every category. But if not, let the legacy of MM2: HWGA live on in your hearts as the happiest movie ever made, and the best option to watch on a plane after several glasses of Chardonnay. Waterloo, promise to love you forever more—and forevermore I will.

Related Story
The Song of This Summer Should Be By ABBA
This content is created and maintained by a third party, and imported onto this page to help users provide their email addresses. You may be able to find more information about this and similar content at piano.io
Advertisement - Continue Reading Below
More From Culture
'Bridgerton' Season 2: Everything We Know
The Best Feel-Good Movies to Curl Up With
Advertisement - Continue Reading Below
'Shadow and Bone' Season 2: Everything We Know
Will There Be a Season 3 of 'Virgin River'?
The 'Younger' Cast Plays Trivia About Each Other
The K-Movies on Netflix You'll Be Hooked On
The 12 Best Action Movies of 2021 (So Far)
Ready for a Good Cry? Try a Korean Romance Movie
The Most Eagerly Anticipated Horror Movies of 2021
Jessie Ennis & Charlotte Nicdao on 'Mythic Quest'