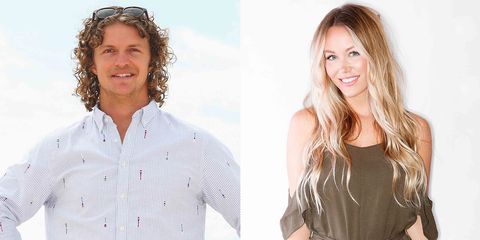 I can't watch just one television show. If I love a show that has more than one edition, I will hunt down the other versions of the show with everything I have. I've seen every episode of America's Next Top Model multiple times, but I emphatically believe that Australia's Next Top Model is what ANTM thinks it's doing and failing at. I've watched Project Catwalk, the UK's version of Project Runway, and that's how I was already obsessed with Gemma Chan when Crazy Rich Asians came out last summer. So being MarieClaire.com's resident Bachelor expert (again, a title I didn't bestow onto myself but am also not rejecting) I got lost in the dark web and have seen pretty much as many international editions of The Bachelor as I have the American one. And, man, they are straight up great.

American audiences got a glimpse into the contestants of the international editions with The Bachelor: Winter Games in 2018, where we were introduced to Benoit, Jacuzzi-loving Christian, Lily, Jordan, Kevin from Canada, and Yuki. When Winter Games ended, I got lost in a deep, deep Bachelor Australia hole for a few months, and it was all I could think about. So then I watched The Bachelorette Australia. Then Bachelor in Paradise Australia (which I always like to say is where Jared realized he was in love with Ashley I whilst being surrounded by other castoffs from the US season trying to extend their 15 minutes). Then The Bachelor Canada, The Bachelor New Zealand.

Unfortunately, I've only seen the English-speaking international seasons, but if I ever get around to learning Romanian, you know I'll watch The Bachelor Romania.

Related Story
Where Are They Now: The Couples of Bachelor Nation

Why are these shows are so great? Well, the premise is familiar, but they're under less of a "Hollywood" impression to make sure there's a happy ending. The Bachelor Australia ended last season with Nick "Honey Badger" Cummins not proposing to anyone, and everyone was as angry about it as they were when Brad Womack did on his season of the American franchise. “Both of you are amazing women,” Cummins said at the time. “And trying to find my way in that cloud is too much for me right now.”

It was hard not to side with Mikhel and be angry when Jasmine chose Kevin over him (and I say this as a Kevin stan, I'm so happy he went on Paradise US and met Astrid) just like in Rachel's season when she picked Bryan over Peter. The international shows feel more real, even though they're just about as successful as the American franchise—of the 11 seasons I've seen from Canada, Australia, New Zealand, and the United Kingdom, only three of the couples are still together–it gives off the vibe that the show might actually work, and doesn't feel quite as produced as the American counterpart, and the drama feels less manufactured. Oh, and the most realistic thing, at least in The Bachelor Australia, is that the show ends with a promise ring, rather than an engagement ring. Less pressure.

But what's even better is that the crazy moments would never fly in the American version. Kiwi Jordan choosing his final one via coin flip? Twitter would have to shut down because people would be so upset if that happened with Colton or Arie. On The Bachelor Australia, Blake dumped his final pick to go back to his second-runner up, who just happened to be friends with the final pick and the runner up that season. Can you imagine the snake emoji attack that they would have to endure over here?

The Bachelor Australia also varies its selection for the lead. Meaning that if you make the top three, you're not automatically in contention for the lead next season. They just announced they picked an astrophysicist (America would never) for their next season, and they've had actual celebrities like Sophie Monk (the Australian version of Rita Ora) in the lead role. Imagine if Khloé Kardashian actually became The Bachelorette and that wasn't just some weird harassment the creator was trying to pretend was real. The shows manage to pull off things I can only wish would happen in America. I mean, look at The Bachelor Vietnam, where two contestants left together after falling in love! This is the kind of wholesome content we are robbed of in The Bachelor US.

Don't ask me how I watched them, because I am pleading the Fifth now before the Internet Police come after me but if you can find them, the international seasons will bring you joy, make you wish we could do half of they things they do, and quite possibly... make you believe this whole crazy premise might actually work.