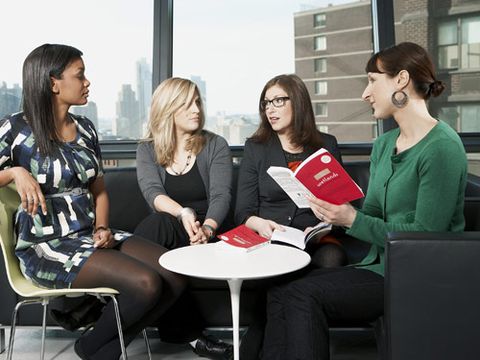 THE PLOT: Helen Memel is a precocious 18-year-old who has just checked herself into the hospital after a shaving mishap "down there." (Warning: If you're the kind of woman who says "down there," this novel, by Charlotte Roche, isn't for you.) Bedridden and bored, Helen reflects on her scandalous sexual exploits and poor hygiene habits, sparing no gross-out detail, in between attempts to get her divorced parents back together.

SARAH, 27 (ASSISTANT EDITOR): I really disliked this book - it actually made me gag! When she talks about having sex while she has a hemorrhoid, which she describes as being shaped like cauliflower - I will never eat cauliflower again. I know the novel's supposed to be a feminist manifesto against overdoing it with the hygiene, but it's too much.

LAUREN, 34 (ARTICLES EDITOR): I liked it. Roche took all the things that women find transgressive, like poop and periods, and put 'em out there to make us more comfortable with the idea of talking about them. She's saying, "I'll gross you out so much that in the end you won't be grossed out by your own bodies anymore."

JIHAN, 24 (EDITORIAL ASSISTANT): I think it's alienating, rather than creating dialogue. It's not like she's writing about unruly leg hair. That scene when Helen pulls out her tampon, rubs it on the bathroom floor, and reuses it as some act of rebellion? What's feminist about that?

LEA, 32 (FEATURES EDITOR): I think you're getting hung up on narrow definitions of feminism. Of course Helen's situations are totally exaggerated, but what's really so disturbing about it? I mean, why can't we talk about our periods?

SARAH: But here's my other problem: There couldn't be a more clichéd story than "girl has troubled upbringing and acts out sexually." The fact that her family life is so screwed up - her mom tried to kill herself and Helen's brother; her parents can't be in a room together--invalidates the book's points by making them come from such a damaged character.

LAUREN: I disagree. Because of the outrageous lengths to which Helen will go to mess with everyone - walking through the hospital with her bum showing - when she does reveal those moments of painful vulnerability, it's all the more poignant.

LEA: To me the plot was subservient to the need to tackle the taboos. Like a period stain - we're supposed to be so ashamed of that.

JIHAN: Who's ashamed of that? I talk to my friends about that sort of thing. That's why I don't get it. I can't believe it was such a huge sensation in Europe.

SARAH: I can't picture it being a big hit here - and I really can't believe you guys liked it as much as you did!

LEA: Maybe there's a generational divide. Lauren and I are a few years older than you and Jihan. My friends and I don't even talk about our bra sizes!

SHOULD YOU READ IT?