Forgive me, Father, for you make me want to sin. If you're anything like me and you’ve finished Season 2 of Fleabag, Phoebe Waller-Bridge’s critically-acclaimed, fourth wall-breaking series on Amazon Prime (which hit the site May 17), chances are there’s a certain scene you can’t get out of your head. At the end of episode four, our heroine (played by Waller-Bridge and known only as Fleabag) has met the sexy, young priest she’s befriended (played by Andrew Scott) in the church after hours to playfully—and then less playfully—give confession.

The Priest (the only name he’s given, although if you consult the internet you’ll find he’s more often referred to as “The Hot Priest”) tells Fleabag to kneel. And then he enters her side of the confession booth, kneels down beside her, and kisses her so deeply I had to pause the show and take a minute for some deep breaths.

The Hot Priest is an exercise in contradictions: He’s a priest of the tired, extremely problematic Catholic Church, but he’s young and attractive. He smokes, wears a leather jacket, and drinks gin and tonic from cans. He’s self-aware and flirtatious (“Calling me ‘Father’ like it doesn’t turn you on just to say it…”). And, of course, having taken a vow of celibacy, he’s the ultimate forbidden fruit.

But the Priest in Fleabag offers something less carnal; he genuinely believes in the power of God to make his life and the lives of his fellow men better, more meaningful, and more optimistic. The Church for him is a place of community and philosophy.

In that way, it’s probably more apt to compare him to one of Jane Austen’s clergymen than HBO’s “Friar F*ck.” Three of Jane Austen’s heroines end up marrying men of the cloth, in Northanger Abbey, Sense and Sensibility, and Mansfield Park (they’re Protestant, not Catholic, and so the no-marriage hiccup doesn’t apply). Especially when compared to the brooding Mr. Darcy, those three heroes are sweet, shy, bookish, and well-meaning. That’s the secret weapon of Scott’s Sexy Priest: A liturgical thoughtfulness layered on top of the chemistry and swagger, with a sexy built-in taboo.

He’s a Catholic entirely divorced from the messy politics of the Church or its horrific scandals—he’s just a human being, trying to live his best life, who finds beauty in ritual and faith. It’s that side that makes it so easy for Fleabag (and the viewers) to fall in love with The Hot Priest, especially once we witness the genius writing decision to show that the Priest understands our heroine in a way no one else ever has by noticing when she breaks the fourth wall to talk to the audience.

Like our heroine, the Sexy Priest can be selfish and misguided. Fleabag is a show about broken, imperfect people dealing with absurdity that ends up seeming not all that absurd. Waller-Bridge has mastered the sleight of hand that transforms a funny situation into something tragic before you even notice it happened. “Sex with a priest” is a punchline to a dirty joke, until it’s suddenly meaningful—and heartbreaking.

Related Stories
The TV Shows You'll Be Glued to This Summer 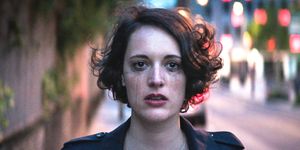 Is TV Finally Ready to Accept Unlikable Women?
Like 'Killing Eve'? Here's What To Watch Next
This content is created and maintained by a third party, and imported onto this page to help users provide their email addresses. You may be able to find more information about this and similar content at piano.io
Advertisement - Continue Reading Below
More From Culture
Films That Pull Back the Curtain on Royal Life
'Succession' Season 3: Everything We Know So Far
Advertisement - Continue Reading Below
A Father’s Day Gift Guide for Procrastinators
We Finally Know Who's Hosting 'BiP'
Won't Call the Midwife
What Betty Broderick's Kids Think About Her
Why Did the 'Dawson's Creek' Theme Song Change?
Chris Harrison Will No Longer Host 'The Bachelor'
Will There Be a Season 3 of 'Virgin River'?
'Bridgerton' Season 2: Everything We Know