Two weeks ago, when Sean Spicer made his Dancing With the Stars debut in a lime-green situation, looking like a green M&M/Sid from Monsters Inc./Oscar the Grouch in a blonde wig, I knew this was going to get ridiculous. As the former press secretary for President Trump, Spicer's time on the show thus far has been controversial—and this is a pretty transparent effort to restore some kind of positive image in the public eye. So he decided that the best course of action is to dance terribly in front of strangers, which, sure! But could he actually win? There are a couple of indications that he might go farther than expected—let's break it down.

Spicer was a controversial pick.

Lest we forget, host Tom Bergeron was not a fan, tweeting honestly (and quite bravely): "[It was] my hope that DWTS...would be a joyful respite from our exhausting political climate and free of inevitably divisive bookings from ANY party affiliations." So even within the DWTS cast and crew, this wasn't an easy decision.

He has improved...but it's not great.

The judges said that his second dance was better, which I'm sure was in large part because he decided not to show up looking like a lime grenade/a deeply nauseous bird/a flamenco dancer that died:

But it's still not great. When they started, Spicer's partner Lindsay Arnold said he was dancing at a "pre-pre-school" level, so his improvement compared to other contestants, like the much-beloved Bachelorette Hannah Brown (GO HANNAH) probably isn't going to get him where he needs to be.

Spicer has started a "campaign."

No, really, the Spicer/Arnold 2019 campaign has a website and a video, leaning into the ridiculous and taking great care to try and "humanize" him:

He remains unfunny. Unfortunately, because of course, he's gotten support from the far-right, including Mike Huckabee, who tweeted, "Wanna create an emotional meltdown in Hollyweird? Vote for Sean Spicer to win "Dancing with the Stars" tonight and every night he's on."

Critics are making sure he's not seen as harmless.

Luckily, DWTS fans are calling out the strategy, and many say they're boycotting the whole season:

Sean Spicer is on Dancing With the Stars right now. https://t.co/YrfzpjuXvz

Please don’t laugh when Sean Spicer when he says he’s on Dancing With the Stars dancing for Christ.

Yes, yes. I’ll show myself out.

If former press secretary Sean Spicer wins Dancing with the Stars, then I’m telling you right here and now that I’m blaming the Russian judge for vote tampering.

Although I'm sure the show is benefiting off the back and forth. In a way, I'm quite pleased that Spicer decided to go on DWTS, because it has given us moments that I will treasure (read: watch with disdain) forever, like so:

When we need to contend with the tremendously damaging work he's done for the Trump administration, a pairing with these ridiculous gifs should really seal in the effect, I think. 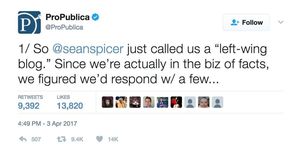 ProPublica Just Owned Sean Spicer on Twitter
Katherine J Igoe Katherine’s a Boston-based contributing editor at Marie Claire online who covers celebrity, fashion, entertainment, and lifestyle—from “The Bachelor” to Everlane to Meghan Markle.
Advertisement - Continue Reading Below
More From Culture
You Can Now Take a 'Love Is Blind' Vacation
The Best New Music of 2020 (So Far)
Advertisement - Continue Reading Below
Will Hannah Ann Sluss Be the Next 'Bachelorette'?
The 13 Sexiest Movies on Netlfix
'The Bachelor' Has Already Finished His Season
An Investigation Into the Next 'Bachelorette'
This Amazon Reality Show Is a Fashion Girl's Dream
The 25 Sexiest Music Videos of All Time
Who Is 'Bachelor' Contestant Victoria Fuller?
Does 'Bachelor's Madison Prewett Self-Eliminate?