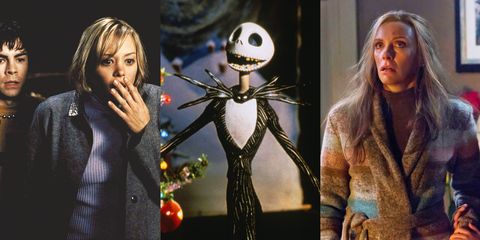 The halls may be bedecked and the carolers may be a-singing, but we're always in the mood for a good scare. Find relief from the saccharine holiday cheer or a dysfunctional-family gathering with a movie that understands your pain. Set during the most wonderful time of the year (so sayeth Andy Williams), these horror movies serve up some righteous holiday fear.

So good, it's being made a third time (yup, it's scheduled for release December 13, 2019). The original stars the luminous Olivia Hussey—fresh off her breakout role in Franco Zeffirelli's Romeo & Juliet—and the always-feisty Margot Kidder (Lois Lane in Superman) as sorority sisters plagued by an obscene caller with an especially creepy voice right before the campus clears out for the holidays. If you dare to watch only one movie off this list, make it this one. The deaths are gruesome—one in particular occurs while a choir of angelic children drowns out the screams of a victim being stabbed by a glass unicorn—and the directing by Bob Clark is masterfully atmospheric and creepy.

A bucolic English country home is the setting for petty jealousies, sibling rivalry and a deadly rampage of rosy-cheeked children infected by a mysterious virus. Amid the opening of presents, raucous play and feasting, the kids start to go a little funny. The lone teen in the group senses something is off. As the suspense builds, the dead-eyed little monsters pick off the adults one-by-one, using their mama-bear instincts and base male belligerence against them. It's both highly satisfying and uncomfortable to watch the misunderstood teenager (aren't they all?) take out her pent up angst on the killer brats.

John Waters (director of Pink Flamingos, Serial Mom and other offbeat gems) loves this movie, so you know you're in for a wild ride. Harry spends his time spying on neighborhood children, noting if they've been naughty or nice, sleeping in a Santa suit, and decking out his home with Christmas decorations. But despite his delusions and murderous rampage, you will find yourself siding with him as he gives neglectful fathers, sleazy schemers and teen meanies their just desserts. The film ends with a flying van and a happy ending—of a sort.

Before Google Maps, shortcuts were a more risky proposition. In this 2003 road-trip-gone-bad, it's a deadly one. On the way to spend Christmas with his in-laws, a man and his family take a shortcut through a wooded street, and an encounter with a distressed woman and her baby sets off a series of spooky events.

Director Joe Dante's classic is part of the '80s-movie canon. A traveling salesman picks up an unusual pet in a mysterious Chinese gift shop and his teenage son recklessly breaks all the rules, resulting in their small town being terrorized by mischievous creatures whose malfeasance run from silly shenanigans in the local bar to attempted murder.

This dark horror comedy (based on the Central European folklore character of a horned demon who comes around at Christmas time to punish misbehaving children) stars Toni Collette (Muriel's Wedding, Hereditary) and Adam Scott (Big Little Lies, Parks & Recreation) as unhappy parents to a young boy named Max. Stranded together during a snowstorm at a familial gathering of extended family, Krampus pays a visit to the dysfunctional brood who have lost their Christmas spirit (with the exception of the wise old Austrian grandmother, of course) with deadly consequences.

The Nightmare Before Christmas (1993)

One might say this is more of a Halloween movie, but that's just nitpicking. This charming Tim Burton stop-motion animated musical combines the director's signature Goth-y imagery with humor and heart. The story follows Jack Skellington, who is dissatisfied with his role as the Pumpkin King of Halloween Town and decides to hijack Christmas. Instead of shiny toys and bedazzled trees, kids receive shrunken heads and hissing garland. But his failed experiment reignites his love for the scary holiday and sparks a romance with a sweet rag doll.

This is all your parking-garage fears come to life. A woman leaves an office holiday party and becomes trapped in an underground car park by an obsessed security guard watching her every move on closed-circuit television. The cat-and-mouse game and near-misses will keep you on the edge of your seat.

In this Finnish holiday story, Santa Claus is a demon. Workers drilling into a mountain on the outskirts of a remote town unknowingly awaken an ancient force and the only person who knows how to stop the rampaging minions is Pietari, a quiet young boy who lives with his gruff hard-working father. The snowy landscape serves as a tense and foreboding setting. The silly ending comes out of nowhere but is easy to forgive for its pure wackiness.

Reviled by critics upon its release, the movie has found a cult following of viewers who are attracted to its anti-consumerist message and the deranged justice doled out by a demented and emotionally-scarred man dressed as Santa Claus.

A hard-to-find precursor to the Final Destination franchise, this fun, kind of silly, sort-of zombie movie chronicles the days after a woman survives a crash that killed everyone else on the plane. The newly-dead pop up to collect Death's debt and will kill anyone who gets in their way. A montage of a desolate California downtown seemingly populated only by store mannequins sets the mood. You'll laugh at the 80s fashion, hair and home-design choices but, surprisingly, it will get under your skin.

Part of the Grand Dame Guignol genre of murderous old ladies (think Whatever Happened to Baby Jane?), this one stars a pathetic yet sinister Shelly Winters as a wealthy woman mourning for her dead daughter Katharine whose body is lovingly wrapped in the attic. Sister-and-brother orphans crash a Christmas party at her house and the young girl's resemblance to Katharine sets off a series of events that include blackmail, kidnapping and murder.


Joyce Bautista Ferrari Managing Editor Joyce Bautista Ferrari is the managing editor at Marie Claire, where she bosses people around and loves to write about movies, food and design.
Advertisement - Continue Reading Below
More From Unmissable Movies
The Best Romantic Films of the Year (So Far)
The Very Best Rom-Coms of All Time, Ranked
Advertisement - Continue Reading Below
The 13 Best Upcoming Movies in 2020
The Films That'll Have You Laughing Through 2020
The Most Exhilarating Thrillers of 2020 (So Far)
The Best Rom-Coms Netflix Has to Offer
The Most Exciting New Movies Directed by Women
Unmissable Horror Movies Coming Out This Year
The Documentaries You Can't Afford to Miss in 2020
Movies That Are Bringing the Drama in 2020