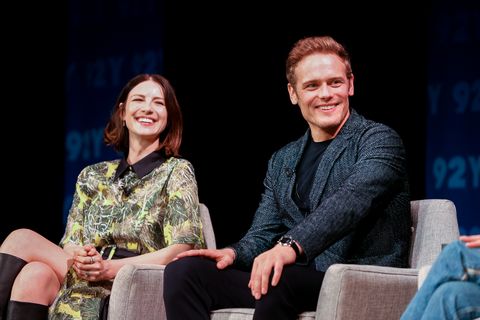 The audience was packed with mostly women from their 30s to their 70s (at least). A woman in front of me had gotten her ticket as a birthday present from her husband, who gets the best spouse award of the week IMO. We were treated to an early screening of the first episode—it's great by the way—filled with love, celebration, sex, a kilt, drama and tenderness. The episode, which will air on Starz, this Sunday, February 16, was met with enthusiasm from the audience.

Afterwards the stars and author had a conversation with Elle.com’s Julie Kosin, about the episode and forthcoming season. The Q&A kicked off with a whiskey guessing game that included teasing, enthusiastic banter, and the actors perhaps getting a bit smashed—which led to Sam Heughan later revealing what appeared to be a major season 5 spoiler.

During the convo, Sam and Caitriona did some moves from their favorite show, “Cheer,” Caitriona demonstrated her great Scottish accent, and Rik Rankin his sharp wit and his great singing voice (he reprised a song from the first episode a cappella). Sam and Caitriona also spoke about their new roles as producers this season:

Caitriona Balfe: I mean I haven't seen it yet, so I don't know if I want to claim ownership [laughs]. There are small things every day that you fight for. We feel very protective of our characters and we feel very protective of this story sometimes if you feel like it’s being pushed in a certain direction, you know you want to protect that and you want to sort of stop it. And it’s always a negotiation and sometimes the negotiations get more heated than other times, but i don’t know if there’s anything particularly specific.

Sam Heughan: I think your influence is gong to be fine. I think certainly we’ve always kind of been part of the process in more or less a degree, but I think this season, as the season goes on, we have more of a say, and by the end of the season we really fought—or not fought, but were very collaborative with the director and producers...and I hope it comes across, because it’s some really strong stuff.

Caitriona Balfe: I think as an entire production, we took some real risks this season. It sounds like we haven’t seen them yet, but it seems like the fact that in season five, we’re taking risks is a really great thing. That people aren’t resting on our laurels, people aren’t complacent and that you're still trying to push the envelope and do something that’s interesting and creative and hopefully that gets rewarded in the sense that it works and there’s a payoff. I’d rather do that and maybe fail then churn out the same thing every week or every day, because nobody wants that, right?

But the highlight of the evening came when Sam was asked about a moment that happened in the episode that had just been screened—and seemed to misinterpret the question and reveal a major spoiler for the upcoming season:

Moderator: Sam, can you talk about the final scene with Murtagh?
Sam: [Confused] Yes.
Caitriona: No.
Sam: No. This scene here, yes. [Audience explodes.]
Caitriona: Yes.
Sophie: Hey, do you remember that panel where Sam Heughan got fired?
Sam: Yeah, I think, um honestly...
Rik: The one we all just watched, Sam, backstage, do you not remember?

Sam seemed flustered as his cast members tried to save him, and recovered by talking about how much he's enjoyed his experience working with Duncan Lacroix, the actor that plays Murtagh. But...it certainly seemed like Sam might have revealed a major spoiler: DOES MURTAGH DIE THIS SEASON???? Based on his cast members' reactions it definitely seems like he did. Oops?!

Overall, the cast were relaxed (the whiskey helped) and really seemed to get along and have fun together. Everyone left on a bit of a high.

Related Stories
Crazy Facts About the Making of 'Outlander'
We Finally Have a Trailer for 'Outlander' Season 5
This content is created and maintained by a third party, and imported onto this page to help users provide their email addresses. You may be able to find more information about this and similar content at piano.io
Advertisement - Continue Reading Below
More From Culture
19 Documentaries on Netflix to Watch Right Now
What Happened to the 'Chicago 7' After the Trial?
Advertisement - Continue Reading Below
A Mom of 3 Drowned. Her Death Remains a Mystery
How Did Carlina White Solve Her Own Kidnapping?
A Convicted Murderer Has Been on the Run for Years
Taio Kaneta Runs a "Counseling Café" In Japan
Christopher Dansby and Shane Walker Remain Missing
"Jennifer Fairgate" Died Mysteriously In a Hotel
What Happened to Jack Wheeler?
'Unsolved Mysteries' Wants Answers About This Man