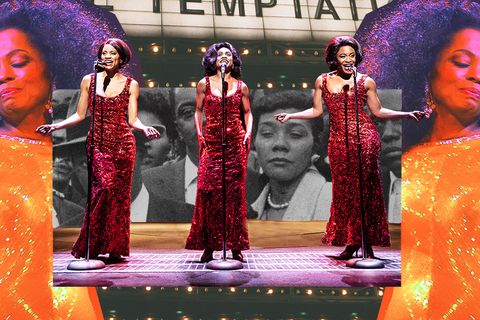 Candice Marie Woods was 11 when a classmate called them [EDITOR'S NOTE: Woods prefers they/them pronouns] the n-word. They had been assigned to a group project with a boy who hit them with the cruelest insult that a young person could hear. But the future Miss Diana Ross was raised too well by her tenacious mother to let it bring them down. Not only did they emerge undaunted, they left their childhood home of Dallas for New York City just three years later to train at The School of American Ballet. At 17, they performed in Hairspray, followed by Catch Me If You Can, Nice Work if You Can Get It, and The Book of Mormon, before landing the role as THE Supreme (you know the one) in Broadway’s musical about the life and times of the Temptations: Ain’t Too Proud. In honor of Black History Month (and frankly, the power of solidarity), Woods takes us backstage for an intimate look at the prejudices and glory of being a young, Black, and queer person in show business, and the transformative power of music we ain’t too proud to sing too loud.

Marie Claire: Tell me more about the first time you remember experiencing racism?

Candice Marie Woods: Growing up in Texas was an interesting thing. I didn't know what I was experiencing [with racism] until after [it happened]. I was assigned to be in a project with a white boy who then said to me that he “didn't want to work with no n*gger.” And I think that was the first time I was referred to as a “n*gger.” But I experienced racism all the time growing up in the dance world. There were just very few black dancers in Texas who people wanted to discuss. I couldn't find tights that matched my skin. I couldn't find things that suited my body type. I was very small but I had a very large chest; I wouldn't even call that racism...

MC: Systemic racism? They don't make things for you because you don't matter to them.

CMW: Absolutely. I experienced another moment with one show in particular. A lot of the shows that I've done prior to doing Ain’t Too Proud have been mostly white casts; I've typically been the “token black girl” in the cast. So, in one show, there was a moment where they had posted a billboard of all the girls and the leading guy in the show. We had taken this beautiful, awesome picture, and I was on the end of the picture. And I got cut out of that photo. It was in Times Square, this big billboard of everybody else's face but mine. And I do remember seeing that and everybody was talking about how excited they were [about it] and I didn't say anything, but I felt really hurt. I felt just erased. Like I was invisible, and I felt alone in that moment. I couldn't really talk to anyone about that, because I didn't want to rain on anyone else's parade.

MC: Why do you think you felt that kind of responsibility to not rain on anyone's parade?

CMW: I was younger and because I was trying so much to just continue in this career and not be seen as “difficult.” I was trying to appease. I was trying to fit into the mold. I was trying not to stand out too much. At that time, being young and maybe not being as much of an activist, I didn't feel like it was my place, and I certainly didn't want to lose my place in this space of the Broadway world.

MC: You're afraid because you think that you have so much to lose.

CMW: I would say that. But it also becomes your reality, and once it becomes your reality, you start to accept it. Then you see how unbelievably ridiculous that is. Now I can say that I'm past the, “Oh, woe is me. This is hard.” Now I'm about, “Okay, well, how can we fix this?” So now if there are ever moments, whether it's racism, whether it's some uneducated comment about the queer community, or some kind of weird stance on just gender or ageism or anything, I'm standing up, I'm saying things. I'm speaking out as respectfully and as honestly as I can, without losing a job but also with no fear.

MC: There's a scene in the play, “I wish it would rain,” which takes place right after MLK is assassinated. David Ruffin [played by Ephraim Sykes] is kneeling on the floor and crying and everyone in the audience was crying. And you think, wait a minute, this feels so relevant right now.

CMW: Can you imagine being, living in that time...there's a feeling of not mattering to people that I can't imagine. Walking in utter fear, even as a high-profile star, not knowing whether your life really matters to the people who are smiling in your face and asking for your autograph and dancing to your music. And I think about it and it makes me angry, but then it also, it just ties it all back in. We've progressed, but we still have so far to go.

MC: You can feel it in the audience.

CMW: That's what's so great about the Temptations, about their music, about that time. They really did bring people together. I know music has a way of doing that, and the Temptations were part of that revolution. Even though there are days when I'm mad—I'll be mad at where we are in America, like where we're standing right now—there's a little bit of hope when you get to go and do a show about racism. I'm just hoping that that one person goes and thinks, Huh. Yeah, that wasn't cool back then. Maybe I shouldn't be trying to 'Make America Great Again,' because that wasn't great.

Some people would say to you, “Oh, you see now, this is why we're so divided.” But no. You have gotten very, very comfortable sitting on your internal racism and external racism. We're fighting to have a better understanding of one another, but to also speak out and help one another in this climate. Because it has been there before Donald Trump. It's still here, and Trump actually has shaken that up again and put it out in the open. He is the reason I'm like, “Okay, well if this man wants to be openly racist and is now openly misogynist, and open all of that, well then I'm going to be openly proud.” I'm going to be openly there for my friends and my colleagues and my family members within all these different communities that he is anti.

MC: Tell me about your experience of coming out as queer.

CMW: I fell in love with a trans human being, a trans person and a non-binary person, and that really shifted everything for me. [When] I came back [to Broadway] I felt like I had this book of knowledge to share with a lot of people, especially in the theater community. We are such an open community and we pride ourselves on being open to a lot of different people, but at the end of the day, there's still some work that needs to be done. I mean, we need to stop with the only hiring white people to do “white roles” when it's not a white role. There's a lot of stuff that can be done within the LGBTQ+ community, not just the gay white man community. There's a lot that can be said for Black people and Black rights that could still be done. We could be raising way more awareness of the folks who have been shot in the streets by these policemen. We could be raising way more awareness within our community, because it's the work. It's what we do. We tell stories on stage. We tell stories of all kinds of folk on stage, and we need each other. We need each other. We need each other's experiences in order for the stories to keep coming. So you can't just shut us out.

MC: Miss Ross wouldn’t let herself be shut out. What does Diana Ross mean to you?

CMW: Diana Ross has been a huge inspiration for me my entire career, because I have been playing her for a long time. I feel like...playing this beautiful, elegant, graceful character who I wasn't always, I kind of grew into that. She's inspired me. It's been my career, but it's also been kind of my life to throw on the fancy gowns and the makeup, then the wigs and you know, she just kind of inspires me to be that diva in my life and to just shine.

MC: She's so glamorous and confident. All the time. Even now.

CMW: Exactly. I love that about her. And I do try to be that in my own life because I do struggle with anxiety. So sometimes I tend to just kind of fall into myself, and playing her every night allows me to step out and completely take the stage.

Related Stories
Model Duckie Thot on Representation in Fashion
Tracee Ellis Ross: In Her Own Words
This content is created and maintained by a third party, and imported onto this page to help users provide their email addresses. You may be able to find more information about this and similar content at piano.io
Advertisement - Continue Reading Below
More From Culture
Meet the Cast of Netflix's 'Squid Game'
We're Getting a Season 4 of 'Manifest'
Advertisement - Continue Reading Below
Emma Mackey From 'Sex Education' is a Rising Star
The 'Sex Education' Season 3 Ending, Explained
Action Movies With Strong Women Front and Center
'The Great British Baking Show' Is Coming Back!
'Bachelor In Paradise' Spoilers: Your 2021 Guide
'Bachelor In Paradise' 2021: Everything We Know
Films With Plot Twists You'll Never See Coming
Mimi Keene Stole the Show in 'Sex Education' S3