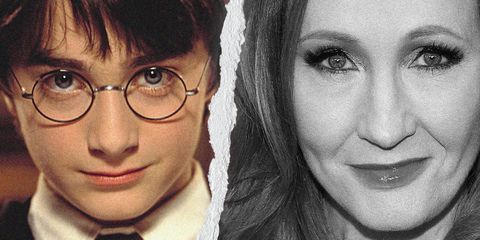 Harry Potter fans—yes, I'm addressing roughly the entire Millennial generation—we need to have another tough conversation with ourselves: We must end our Harry Potter fantasy now.

Last week, J.K. Rowling tweeted a transphobic comment (not for the first time). She quickly doubled down on those feelings, publishing a lengthy essay in response to the backlash, leaving Potterheads to decide whether denouncing Rowling and her anti-trans positions meant they must also denounce the whole Potter franchise.

Like so many others, I feel a deep, emotional connection to the series. It has been the soundtrack of my entire life; each new book coinciding with an adolescent milestone of my own. When the seventh and final book was released the summer before my senior year of high school, it felt like Harry, Ron, Hermione, and I were all transitioning into adulthood together—the culmination of their adventure was also the culmination of mine. Pottermore personality quizzes determined that my Patronus was a silver cat and I was owed a yew wand from Ollivander's, making me feel seen—transforming my specific traits into unique powers that I could be proud of instead of loathe. The fact that it is common to define oneself in terms of Hogwarts houses (proud Gryffindor speaking) is a mark of how profoundly personal this universe feels. The books felt like a place where I—we—belonged.

I’m also a ciswoman, which means my feelings are not the point right now. As significant as the franchise has been for me, if I am actually going to be the ally I fancy myself to be, that means I have to consider the damage Rowling (and potentially the entire series) has done to trans, nonbinary, and gender nonconforming people. Being a white ciswoman gives me a voice—like a magical power, but a shitty one, because it's a power others are denied. It’s my job to use that "magical power" as a force for good and say what nobody wants to say. To bring to light that if Rowling had been a Hogwarts parent and heard that Lupin was a werewolf, her Karen-self likely would have demanded he be fired for putting her little Hufflepuff in danger.

Rowling has come under fire several times before for saying or insinuating awful things (as she herself noted in her essay). In December, she tweeted in support of Maya Forstater, noted TERF (trans exclusionary radical feminist). And recently, people have pointed out several troubling or outright racist elements of the Potter series: Gringotts' goblins, creatures who control all the money in the Wizarding World, are described in explicitly antisemitic stereotypes. The single Asian character in the series is named Cho Chang, of all things. Rowling’s stories set in the United States, at a school named Ilvernmorny, have been roundly criticized for appropriating and flattening Native American mythologies, borrowing liberally from entirely disparate tribes and traditions, and watering them down into something cute and vaguely magic-esque. The stories center around a white settler from Ireland who establishes the magical school, implying there are no Native American witches or wizards at all. Meanwhile a “Pukwudgie,” a creature from Wampanoag lore, serves as side-kick and is meant to clumsily represent all Native American people. (Not to mention, Rowling’s books treated Hermione’s dedication to SPEW like a goofy personality quirk akin to being a raw vegan.)

As a theoretically woke coalition, people in my orbit can acknowledge these things, but we all seem particularly reluctant to even consider canceling (whatever that means) Harry Potter.

As we once again grapple with Rowling outing herself as troubling, to say the least, the “art versus the artist” argument has bubbled to the surface—as it always does. Fans have fretted and argued over whether we can, in good conscience, continue to listen to Michael Jackson or watch Woody Allen movies, now knowing what they have been accused of. Is their cultural contribution enough to outweigh reprehensible behavior?

Thanks to my English Lit degree, I can certainly summon a convincing case that Harry Potter should be appreciated independently of Rowling. My instinct is always to see a work of art, no matter what it is, as its own thing. Once you’ve created something and put it out into the world, it’s no longer yours. It takes on a life of its own; it’s like having a literary child.

And this is the case when it comes to Harry Potter. Rowling isn’t the sole creator of this universe as we inhabit it now. The actors who starred in the movies, for example, are indelible elements of the franchise, and many of the most visible stars have been outspoken in opposition to Rowling’s position on trans rights. See: Daniel Radcliffe’s statement in The Trevor Project. After Rowling released her divisive essay, other stars, including Emma Watson (Hermione Granger), Bonnie Wright (Ginny Weasley), Evanna Lynch (Luna Lovegood), Eddie Redmayne (Newt Scamander), and Katie Leung (Cho Chang), began voicing their support of trans rights on social media. Noma Dumezweni, who played Hermione in the Cursed Child stage play, and even Arthur Levine, who edited the Harry Potter books, also spoke out condemning Rowling’s comments.

Some of these statements also included a consoling message to fans: that it’s okay to love or have loved Harry Potter. "If you found anything in these stories that resonated with you and helped you at any time in your life—then that is between you and the book that you read, and it is sacred," Radcliffe wrote in his moving statement. And Wright’s tweet read, "If Harry Potter was a source of love and belonging for you, that love is infinite and there to take without judgment or question. Transwomen are Women. I see and love you, Bonnie x."

These words, from people who had a direct hand in creating Harry Potter as we know it, feel particularly comforting. I cannot erase what this world meant to me growing up. I agree with Radcliffe and Wright.

All of this analyzing and agonizing misses the point. Who does it hurt when we continue to lionize a series written by an outspoken transphobe as a generationally-defining text?

Trans people are at increased risk of hate crimes and violence, particularly Black trans women. The Human Rights Campaign counts at least 26 trans and gender non-conforming people who were murdered in 2019, though the real number is likely larger due to non-reporting. Just last week two Black trans women, Riah Milton in Ohio and Dominique “Rem’Mie” Fells in Pennsylvania, were killed. That same week the Trump Administration rolled back anti-discrimination laws that protected LGBTQ people (and particularly trans people) from being denied medical care. This is to say nothing of living in a world whose very infrastructure seems determined to deny the reality that trans, nonbinary, and nonconforming people exist at all. Ideologies like Rowling’s are actively and intentionally cruel and dangerous.

I don’t want to be one of those people who says “I’m an ally!” and does nothing more than attend a Pride parade and feel moved by Call Me By Your Name. My childhood nostalgia can’t be more important than a trans person’s trauma or physical safety. If continuing to call myself a “Gryffindor” or referring to Hermione as a personal hero valorizes a transphobic figure, bolsters a hate group, and puts people in danger, do I have a choice but to abandon the story?

If I am actually going to be an ally, I have to consider the damage Rowling has done to trans, nonbinary, and gender nonconforming people.

The irony of it all is that Rowling’s books taught us that we each, no matter how young or seemingly insignificant, have a specified contribution to make in the fight against evil. My high school senior quote was Dumbledore’s last line to Harry: “Of course, it is all happening inside your head, Harry. But why on earth should that mean that it is not real?” If I’m honest, there will likely always be a place in my heart for that world, which, indeed, still feels very real to me.

But it is time for Harry Potter to be dethroned from its place atop the zeitgeist. We can no longer use the series as an ethical yardstick, measuring right and wrong on a scale of Voldemort to McGonagall, or use Patronus quizzes as an astrology-adjacent form of self-assessment. We should consider shutting down Cursed Child and Harry Potter theme parks. Because we cannot simply and wholly divorce Rowling from the Wizarding World she conjured. When we patronize Harry Potter parks or movies like Fantastic Beasts, she still benefits financially, and her position of power remains unchecked. In doing so, we abandon the trans lives her public statements endanger.

The Wizarding World isn’t the moral sanctuary it once was. And because we are all adults now, we have to acknowledge that.

In Harry Potter and the Half-Blood Prince, Rowling herself penned, via Harry’s thoughts: “It was important, Dumbledore said, to fight, and fight again, and keep fighting, for only then could evil be kept at bay, though never quite eradicated.” So let’s fight. Let’s use this opportunity to talk frankly about anti-trans violence, TERFs, and the importance of language that identifies people accurately—like using correct pronouns or acknowledging that not all women menstruate and not all people who menstruate are women. It‘s the least we can do in keeping evil at bay.