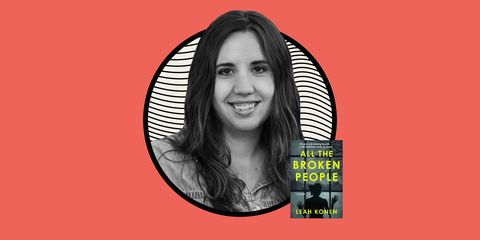 To say it was the moment I’d been waiting for all my life would be a lie. Rather, it was a pivotal career turning point I’d never allowed myself to dream of in more than a decade of trying to make it as a writer. My first novel for adults, All the Broken People, suddenly had multiple publishing houses vying for it, and hardest to believe of all—film and TV offers had also begun rolling in.

So like all fancy people waiting to speak to Hollywood bigwigs, I was hiding out in an emergency-exit stairwell in a loft space in SoHo, a beat-up notebook in my hand, the producer’s printed-out IMDB pages littering the steps. At the ad agency where I was working, it was the only place where the Venn diagram of personal privacy and quality cell reception made sense (curse you, open-plan offices). The call was going great—my fingers might have been shaking the whole time, but I kept my voice smooth (and bonus: no one burst into my stairwell)—but then the question came: “I love how you handled the issue of abuse…is this based on real life?”

I froze. I’d been ready to talk about my training as a journalist, my five published YA novels, my interest in potentially adapting the book into a screenplay myself. I was not prepared to answer such a deeply personal question on a professional phone call. What’s more, All the Broken People, which follows Lucy, a young woman who escapes a dangerous boyfriend but gets more than she bargained for when she befriends her new neighbors, isn’t entirely about domestic abuse. It is one part of Lucy’s story, yes, but her relationship with modern femme-fatale, Vera, who convinces Lucy to help her fake her husband’s death, is more central to the novel. Shaking away my surprise, I muttered a quick “no,” and the call went on.

All the Broken People
penguinrandomhouse.com
$26.00
READ IT

What had felt like a shocking one-off was actually anything but. Over a couple of weeks of professional phone calls, the outright question—or, at the very least, innuendo that I’d experienced abuse—“I bet the men in your life aren’t too happy about this novel!”—became a frequent refrain. It was a question that never failed to catch me off-guard. All the Broken People is fiction. Murder, blackmail, faking death. The editors and producers weren’t asking me if I’d been blackmailed—or if I’d been lured into a noir plot with a couple of charming but toxic friends—so why this?

Of course, industry gatekeepers need to be able to ask necessary questions of the writers they’re considering working with, especially concerning identity and whether a story is a writer’s to tell. There is a problematic history in the publishing industry of white, cis, straight, and able-bodied writers appropriating the stories of marginalized people, often with far higher advances and publisher backing than the populations they’re writing about ever get. That needs to be reckoned with—full stop.

There also needs to be a safe space where we can talk honestly and openly about domestic abuse, which is a serious and rampant issue that is only increasing during the pandemic. When I was in the hospital at the end of last year about to deliver my daughter, I was appreciative when the nurse asked my husband to leave the room so she could ask me if I felt safe at home. These dialogues are necessary to ensure people get the resources they need.

That said, we can’t forget the issue of context. A hospital is filled with people trained to handle trauma. Film producers and book editors are not. Had I experienced domestic abuse in my past, would they have expected me to open up about it off the cuff, with people I didn’t even know? Is it really fair to assume that the experiences of a main character are a direct lift from the author’s life? And if it is assumed, have we reduced the vast and inspired world of fiction to creatively written memoir?

Too often, first-person narration by a woman author is read as confessional.

Speaking with other women writers, I found the “is this based on real life?” assumptions and questions were common, and often outright ridiculous. Author of murder-mystery The Lost Night, Andrea Bartz, and I found ourselves laughing (and a bit gobsmacked) when a mutual friend proclaimed insistently that the killer in Bartz’s debut novel was based on me. Finola Austin, writer of Bronte’s Mistress, has been asked several times if the sex scenes in her novel are inspired by personal experience (she’s writing about the Brontes!). Elle Marr (The Missing Sister) says she’s often asked if she’s a twin. Diane Zinna, whose novel, The All-Night Sun, is loosely inspired by a trip she took 20 years ago, perhaps put it best: “Too often, first-person narration by a woman author is read as confessional.”

Even if there are some nuggets of truth in fiction, the decision to open up should rest with the author. “During my first few events, it surprised me to have someone raise their hand and ask me in this crowd of strangers if I had severe postpartum depression like my main character,” said Vanessa Lillie, author of Little Voices. “While I'm comfortable sharing my postpartum experience, I know lots of other people wouldn't be.” Asha Lemmie, whose debut, Fifty Words for Rain, chronicles one woman’s quest for acceptance in post-WWII Japan, said: “I am just not willing to put my trauma on display to justify why I wrote a fictional book…I didn't write a memoir for a reason.”

Are male writers subject to the same inquiries? Stephen King has written extensively about domestic abuse and sexual assault in his prolific backlist—did editors ask him if he was an abuser or assaulter? It’s hard to imagine—if even a handful of his writings were based on truth, he should be locked up for life.

When I set out to write Lucy’s story, I wanted to take into account the nuances of the abuse she faces from her boyfriend, including emotional, mental, and financial. It is my great hope that the book sparks conversations among readers. But I also hope that writers are able to find space from their works of fiction—and be allowed to discuss their personal lives on their terms.