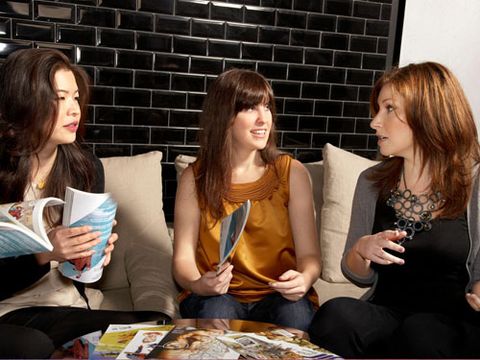 THE PLOT: When the book group hears "comic book," we picture a bunch of mathletes poring over the latest issue of X-Men. Yet we were intrigued by Air, an ongoing series by G. Willow Wilson (illustrated by M.K. Perker), best known for her award-winning graphic novel Cairo. We picked up volumes one and two (the latter is out this month), and took in the story of Blythe, a flight attendant with a fear of heights, who's swept up in an international terror plot. Along the way, she finds a mythical world where a girl can wake up one day to discover she's a superhero.

SARAH (ASSISTANT EDITOR): I had a great time reading this. I'd never read a comic book in my life, but I've always dated guys who were obsessed with them and I thought they were so juvenile for it. But now I totally get it.

NING (SENIOR BEAUTY EDITOR): See, I didn't like the plot. I thought Blythe was an idiot, and the romance between her and Zayn, the secret agent who draws her into his mission, annoyed me. But I still enjoyed it. With all the cliff-hangers at the end of each section, I couldn't put it down. I read both volumes in four hours.

YAEL (ASSOCIATE EDITOR): And the dialogue was so entertaining. When Zayn sneaks into Blythe's room and calls her "love," she says, "You just called me love." So he says, "Should I not have? I forgot American girls like men who don't care about anything." When she tells him he's being poetic, he says, "Only in the 'It's 2 a.m.' kind of way." It's cheesy, but it works.

ABIGAIL (DEPUTY EDITOR): I know you're supposed to suspend your disbelief, but the narrative was too disjointed to help me do that. One minute she's a straitlaced stewardess, the next she's accepting a briefcase from a potential terrorist, and then she's chatting with a giant serpent?

YAEL: Well, the point is that it's an outrageous story. A superhero story! I mean, I'm kind of envious of people who can push their imaginations to this level.

NING: I thought the best part was the idea that a country—in this case a fictional Southeast Asian one—could literally disappear because people forgot about it. It's like there are these places where people are living, but because I'm not aware of them, they don't exist for me.

SARAH: How about when Blythe discovers there's a whole world beyond what we see every day, and she asks her guide, "What do you do when you reach the end of the world?" The guide says, "You imagine more." It was a beautiful, lyrical moment I didn't expect to find in a comic book.

ABIGAIL: I did enjoy certain poetic moments, but the story was just too spastic. I mean, what is "hyperpraxability"?

SARAH: But that's explained. Throughout the series, you can see Blythe is some kind of time-traveling psychic, and then suddenly she has a name for it—hyperpraxability—and she learns there are others like her. I thought that was cool. I can't wait to see what happens in volume three. I'm totally hooked.

SHOULD YOU READ IT?