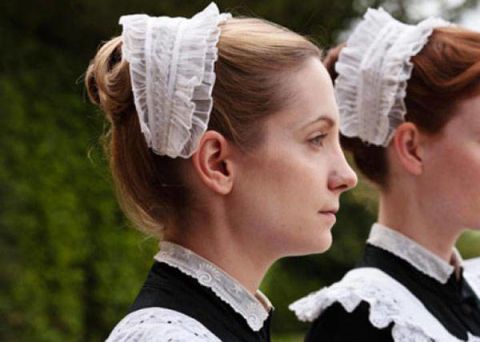 Spoiler Alert! Do not read on if you have not watched season 4, episode 3 of PBS' Downton Abbey Episodes 1 and 2 aired during the premiere last week.

If you can put aside the continued problem of Downton's self-conscious struggle with modernity, and the need to state and re-state that post-War aristocracy is going broke, Sunday's episode is one of the best hours the show has given us in I don't know how long. It is well directed, well acted and heartbreakingly well written. Episode three centers around a house party at Downton: 16 guests and their servants come to the Abbey for a few days of fun, riding, and a little entertainment by a renowned opera singer (the real-life Dame Nellie Melba, played by the real-life soprano Kiri Te Kanawa) who happens to be passing through town. The influx of fresh characters revitalizes the show's dynamic, for better and for much, much worse.

But before we get to the shocking, devastating event that unfolds in the last few moments of the episode, which will no doubt have repercussions throughout the season, I need to glibly complain about two characters who are simply pissing me off: Edna Braithwaite and Lord Grantham.

Edna is sneaky, dishonest, and not particularly fun to watch—she's so obviously those first two things that you can't imagine anyone, upstairs or downstairs, would be so foolish as to trust or engage her. Alas, poor Tom Branson is a primo fool. Misunderstood in his new social strata, he mistakes Edna for a good confidant. All she can offer, though, is a huge tumbler of whiskey, presumably to weaken his resistance.

Tom tries to explain his class discomfort to Lord Grantham, who dismisses him. "But we must go now or we'll get stick," Grantham says, which is a British idiom derived from children's punishment. "Do any of you ever leave school?" mutters Tom.

And yes, Tom, it really sucks that you are blind to Edna's snaky ways, but why can't some of these people grow the eff up? There's Cora, whom I like to pretend is stoned, what with all the goofy smiling and chatty non sequiturs. There's spoiled but likable Lady Rose, who wants all fun, all the time. And there's Lord Grantham, who has been a bumbling dunderhead for the show's duration. It even used to be kind of endearing? But lately, his conservatism and sanctimonious behavior have proved mean, even dangerous—resisting Lady Mary's role in managing the estate, hating Lady Edith's older man. Everyone else may be mourning Matthew, but I'm still wearing black for Lady Sybil, and haven't forgotten Lord Grantham's role in her death.

Fortunately, Lady Mary is emerging from the fog of grief (and thank goodness, because the theme was threatening to be plot quicksand), and we meet her potential love match, the raven-haired, gallant Lord Gillingham. When he asks to take Mary riding, the writers offer up divine innuendo in her reply: "I haven't been in the saddle in ages. I'll be stiff as a board the next day."

But Lord Gillingham has brought more than just his charm: he's brought his valet, Mr. Green, who innocently flirts with Anna throughout the episode, to Anna's impartial amusement, and Bates' deep annoyance. In the final moments of the evening, when the whole house—servants and masters—are preoccupied by the opera performance, Green rapes Anna. Director David Evans splices the attack with shots of everyone else watching Nellie sing Puccini, oblivious to Anna's screams. Later, Green returns to his seat for the show, while Anna, face beaten and bloody, shivers and quakes in Mrs. Hughes's office. When Mrs. Hughes finds her, Anna begs for her silence—including not telling Mr. Bates, for fear he will actually kill Green. The show's closing shot is Anna walking into the night towards home, having refused to let her husband escort her. Bates is left standing alone at the Abbey, confused and worried.

To be honest, I'm uncomfortable with how Bates so immediately factors into the rape, its foreshadowing and its aftermath. Are we supposed to feel that Anna should have been saved by her man? Is there a hint of inherent victim-blaming, given Bates disliked Green from the get-go, and Anna didn't recognize his danger? Is rape what happens to flirts? Is there a deeply negative male stereotype at play, too, in that Bates' initial reaction would be possessive rage, instead of utter tenderness towards Anna, and what she needs from her husband? I don't think Julian Fellowes meant to imply all of this, but those questions are the risks of putting a rape into the plot of a show like Downton, for which we have already willingly suspended our disbelief that women were once so powerless in a patriarchy.

Though the rape and the beating are not visually depicted, Anna's continued screams echo from the dark warren of servant rooms downstairs, and the shocking scene provoked a public outcry when it aired in the U.K. Many people felt a show as typically tame as Downton showing a rape was like "having a murder on Teletubbies," or that it was a sensational play for ratings. Series creator and writer Julian Fellowes defended the scene, saying, "If we'd wanted a sensational rape we could have stayed down in the kitchen with the camera during the whole thing and wrung it out. The point of our handling is not that we're interested in sensationalising but we're interested in exploring the mental damage and the emotional damage." Could it be that depicting real historical dangers to women was a bold move for Downton? And next week, when we find out what happens with Edna and her pushy whiskey, how do we talk about that, in context?

What did you think of the episode? Sound off in the comments below!