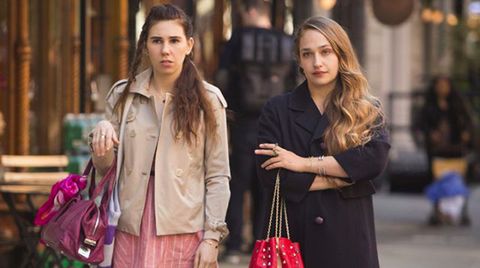 Spoiler Alert! Do not read on if you have not yet watched Girls season 3, episode 5 titled "Only Child."

"Who is Hannah Horvath?" Hannah's new book editor asks in a meeting this episode. Another editor offers, "Mindy Kaling meets Joan Didion," but I have a different answer: She is an evil person who pukes on things metaphorically.

They are all evil people who puke on things metaphorically. None of them are happy, they don't seem to have a clue as to what happiness is, and they're not interested in other people's happiness. They're evil people who puke on things metaphorically. This is what Adam (Adam Driver) screams at Caroline (Gaby Hoffman) during a fight in which she accuses him of being sexually attracted to her, but his statement applies to all of them. This episode is rotten to the black-hearted core—it's a half-hour of "Go fuck yourself" and "Get the fuck out."

First, David's widow (Jennifer Westfeldt, aka Jon Hamm's other half) freaks, understandably, when Hannah (Lena Dunham) can't seem to conceal her sociopathic prioritization of her book deal over the funeral at hand. ("I'm not going until I've locked eyes with Michiko Kakutani," she tells Adam.)

Shosh (Zosia Mamet)—who's caught up in finals, and the quest to find a bankable, bangable boyfriend "better" than Ray, whom she's starting to miss—is sick of Jessa (Jemima Kirke), who, I might remind you, was jettisoned from her old friend's life by a faked death. That is how hideous she is. Adam is sick of Caroline, the "evil person who pukes on everything metaphorically." (NB: When Caroline, a failed actress, goes off on a rant about how she didn't get the part of Alicia Casse in Independence Day, it has the feel of a wink at real life. How much do you want to bet Gaby Hoffman actually auditioned for the role that ultimately went to Lisa Jakub?)

And then there's the most evil metaphorical puker of all: Marnie (Alison Williams). The problem with writing about this show, which I love very much (truly, I reliably turn to anyone watching with me and say, "How can anyone not think Lena Dunham is a genius!") is that thinking too much about these young women fills me with rage. Marnie most of all. And now, everybody, she's boning Ray (Alex Karpovsky), the sweet, chewy emotional center of the show! Ray also happens to be the only person who can tell Marnie bluntly that she's a "huge fat fucking phony," which apparently is a narcissist's aphrodisiac.

When Hannah calls her dad (Peter Scolari) to tell him she has a new publisher, he explains that her lawyer cousin looked at her contract and discovered that the old publisher will hold the rights for three years. This sends Hannah into a panic—she skips over her dad's news that he has just had a biopsy—and she says three years might as well be a hundred.

When her dad says, "We tried for three years for you," Hannah responds with, "Well, you're idiots."

Is she also talking about us? Are we, the audience, idiots? We have "tried" for Girls for three years, waiting to see how the show would grow, seeing how our big, whiny, self-absorbed HBO baby would grow up. In Rebecca Mead's fantastic profile of Jennifer Weiner, she brings up that we often interpret a writer's contempt for his or her own characters as "literary"—Jonathan Franzen, Claire Messud, etc. If this episode was a lowest-of-lows point for Hannah (and she's had some serious lows)—a moment of not giving a flying fuck about anything but her own immediate problems—it might just be a highest-of-highs auteur stroke for Dunham.

Sidenote on that shirt Hannah wears in most of the episode, a beigey-orange crop top collared in green plastic lizards: it's by Toy Syndrome, a new label run by Russian transplant Natalya Nyn—who has worked under Oscar de la Renta, Zac Posen and J. Mendel. Meaning: those lizards on Hannah have serious fashion cred. I own a couple Toy Syndrome shirts and love them, though I don't recommend wearing them around anyone who doesn't have a sense of humor.

This content is created and maintained by a third party, and imported onto this page to help users provide their email addresses. You may be able to find more information about this and similar content at piano.io
Advertisement - Continue Reading Below
More From Culture
The Best Easter Egg in 'Behind Her Eyes'
The Best Psychological Thrillers of All Time
Advertisement - Continue Reading Below
The Best Memes of 2021 (So Far)
The Top-Grossing Book-to-Movie Adaptations
A Look Back at Princess Anne's Life in Photos
Where Is the Cast of 'Gilmore Girls' Now?
The Best Shows to Stream on Every Platform
Who Is "Queen" Victoria on 'The Bachelor'?
Everything We Know About Matt James
Who Is Rachael on 'The Bachelor'?