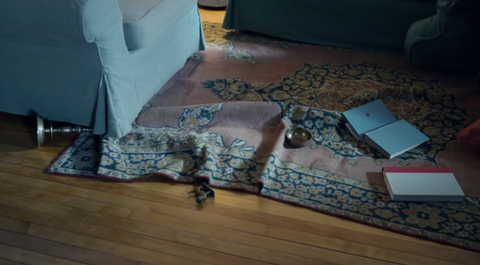 There's no direct imagery of it in the National Football League's new PSA, but the signs of domestic violence are everywhere: the pile of dirty dishes in the sink. The broken candlestick and toppled books lying on a crumpled rug. The fist-shaped hole in the wall.

For the first time ever, the NFL will run a TV spot during the Super Bowl that directly deals with domestic violence. Following several incidents in 2014 that involved players Ray Rice and Adrian Peterson, the league teamed up with No More, a coalition of groups dedicated to fighting domestic violence and sexual assault, to create a series of commercials, including the powerful "Speechless" series.

This ad, which is based on a real-life 911 call in which a woman pretends to order pizza to escape her abuser, will air during the first quarter of the game Sunday. According to Adweek, the NFL donated the airtime and production costs.

Watch both the PSA and Cris Carter's "Speechless" video below.

Fergie Joins the Fight to End Violence Against Women

Our Most Important Mission Ever: Stop Violence Against Women Now