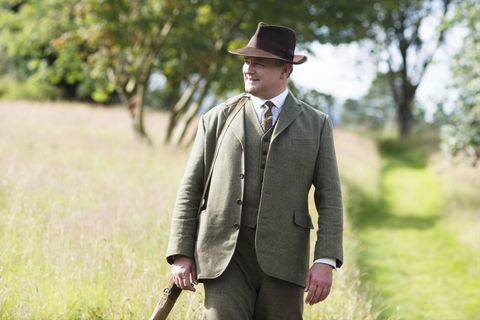 While one part of me wants to see Downton Abbey end in shambles/total and utter devastation —you know, just to shake things up a bit—the boring, not-diabolical part of me would really like everyone to live happily ever after. (Even Lady Mary, who hasn't exactly made many deposits in the karma bank, if you catch my drift.)

Hugh Bonneville kind of feels the same way, except it's pretty hard to tell through the thick coating of media training covering the synopsis of season six he gave Tuesday at the TRIC Awards.

"We're in 1925, so the series has nudged on another six months, and Lady Rose has been on her honeymoon and she's now moved to America," he told Digital Spy.

"Tom Branson has gone to Boston, and some faces we met towards the end of the fifth season may or may not be coming over the horizon to break or make the hearts of Lady Mary and Lady Edith and people like that."

All of us right now: "Mary and Matthew Goode better get together, damn it!"

Before you skip ahead to the comments section to leave your own DA hopes, dreams, and fan theories, some concrete news: There will, for sure, be a Christmas special, which will definitely air Dec. 25.