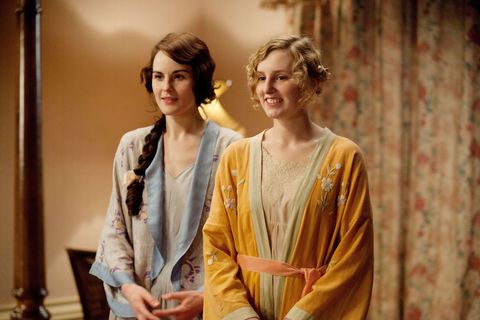 Sorry to tell ya, Downton Abbey fans, but creator Julian Fellowes is just as out of the loop on the ending of the series as you are. Fellowes says the fate of the show is all in the hands of NBC Universal, who owns the series.

"It's not really my decision. I don't own Downton Abbey now," he told The New York Times.

But don't worry, you're not the only one who needs your Violet Crawley fix. The creator is just as invested in the show as you are. "I could walk away. But I wouldn't walk away. It's too much my baby."

Asked if the show will go on past WWII, Fellowes said no. (Thank goodness).

"For me, that would be a different series. Maybe people would say, 'Oh my God, that's baby George, grown up!' But I don't think it would be continuous, with Michelle Dockery with her hair covered with talcum powder."

As for exactly when the series will end (given Maggie Smith's admission that she may or may not be leaving the show sometime soon), it's all up in the air. But the sweet, sweet torture will eventually end, promise.

"It won't go on forever — I'm not a believer in that," said Fellowes. "But I can't immediately now tell you where the end will be."

'Downtown Abbey' Star Joanne Froggatt Takes Us Behind the Scenes