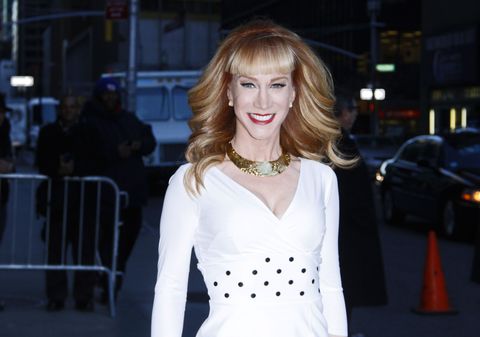 Kathy Griffin's decision to leave Fashion Police has sent a wave throughout Hollywood, and backing her up is actress and Girls star Lena Dunham.

On hearing the news, Dunham posted a picture to Instagram of Griffin (wearing Minnie Mouse ears), where she congratulated the star on the choice she had made and the reason she gave for leaving the show.

"Congrats to my beautiful friend Kathy Griffin for bravely saying enough is enough to intolerance of all kinds on television," she wrote. "She's modeling a better way for the youths (and working those ears.)"

After just seven episodes, Kathy Griffin has announced that she's quitting Fashion Police. While she didn't say it directly, it's easy to assume her departure is the result of all the recent drama around the show—host Giuliana Rancic's inflammatory comments about Zendaya's Oscars hair, Kelly Osbourne's resulting exit, and rumors that Khloe Kardashian might replace her.

Griffin joined the team to fill the shoes of the late—and beloved—Joan Rivers, but said on Twitter tonight that she wanted to bring her own brand of comedy to a show she now realizes is going in a different direction.

The question now is: Will they replace her and Kelly Osbourne? Or, as some suspect, cancel the show altogether? Stay tuned.