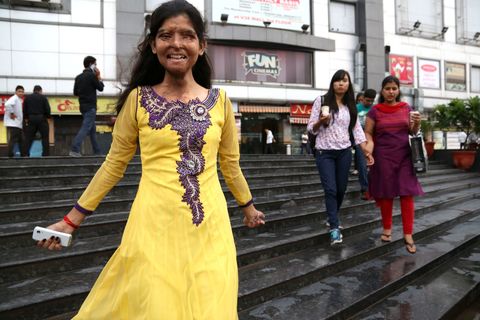 Simply beautiful. A new calendar is showcasing acid attack survivors and putting them in a different light—hoping to redefine what we see as beauty.

Created as part of the Stop Acid Attacks campaign by the Chhanv Foundation in India, the funds from the sales will help the rehabilitation of Indian survivors.

"In a society as insensitive as ours, it doesn't take much for the acid attack victims to lose their self-confidence," the calendar's website states. "Apathy of the attackers give birth to the acid attack. The apathy of relatives, 'friends' and neighbors generates burns everyday. The calendar shoot aids the society to broaden the interpretation of beauty."

Women are often the target of acid attacks. In fact, it's believed that around 80 percent of victims are women and girls. There are roughly 1,500 documented attacks each year, with the majority of them occurring in India. Women are often targeted for refusing sexual advances.

"They are fighters," Rahul Saharan, one of the two photographers (along with Pascal Mannaerts), told the Huffington Post. "It's up to us—we make them victims or we make them fighters."

You can see more images below. Learn more about the calendar (and buy one) by visiting paltan.in/calendar.

Saving Sonali: How an Acid Attack Victim Made a New Start

A Documentary About Delhi's Brutal Bus Rape Gets Banned in India, BBC Releases It Anyway

I Survived a Deadly Avalanche

Samantha Leal Senior Web Editor I'm Sam, the senior editor at MarieClaire.com.
Advertisement - Continue Reading Below
More From Culture
The Documentaries You Can't Afford to Miss in 2020
'Killing Eve' Season 3 Review: What's Old Is New
Advertisement - Continue Reading Below
A Super Pink Moon is Coming April 7
Pre-Order These Amazing Books Coming Out in 2020
The 8 Best Rom-Coms of 2020
Got 10 Minutes? Here's What to Watch on Quibi
We Could Be Getting More 'Tiger King'
HBO Is Making Iconic Shows & Movies Free to Watch
Tim Gunn & Heidi Klum Also Wear PJs to WFH
'Parasite' Is (Finally!) Coming to Hulu