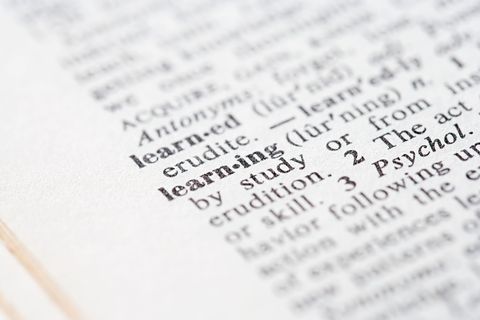 Are your brows on fleek? Have you seen your bae today? Language is weird and wonderful—and in 2015, it's filled with phrases that seem to have honestly just plopped from the heavens like little linguistic presents. But it's time to know what is actually coming out of your mouth. Here, a crash course on the words that have become a part of our everyday lexicon, for better or worse.

Definition: It means to be "on point" or have something that is desirable; perfect

Used in a sentence: "Did you have an eyebrow shaping? Your brows are on fleek."

In 2024, Viner Peaches Monroee posted a video in which she says (seemingly out of the cultural blue) "eyebrows on fleek," and then everyone started using it like it was a word we've been using for years and therefore something you didn't need to explain. That's how language works, I guess.

Definition: A term for your significant other, boyfriend/girlfriend, spouse, or friend

Used in a sentence: "Hangin' with my bae."

Definition: A phrase for dismissal, to show how insignificant someone's thoughts or opinions are; "you can go now"

Used in a sentence: Person A: "Ryan Gosling isn't even cute." (Correct) Person B: "Bye Felicia."

Oh, "Bye Felicia." Probably the biggest instance of Colombusing in recent years, the term is from the 1995 movie Friday (yes, a 10-year-old movie), starring Ice Cube and Chris Tucker. A character—one Felicia—comes by, and is quickly dismissed with a "bye." Henceforth: "Bye Felicia."

Definition: When makeup is applied so amazingly that a person looks flawless

Used in a sentence: "I'm about to give you beat face."

Popularized by makeup artists on Instagram, the term mostly used by the gay community has risen to popularity thanks to shows like RuPaul's Drag Race. The originator is said to be makeup artist Tatiana Ward AKA "Beat Face Honey."

Used in a sentence: "That gratuitous bikini pic is such a thirst trap."

The earliest mention of this phrase was in 2011, when "thirst" also originated as a popular term for lust. Used to describe unapologetically sexy, pouty, sometimes scandalous pics, it basically means someone wants you (and, you know, the rest of the internet) to see their hot bod.

Definition: An exclamation to express immense agreement or approval

Used in a sentence: "Those shoes tho. Yassss!"

Who knows where this came from, honestly, but in 2013, Lady Gaga posted a clip to Instagram that basically took over—and soon, everyone was exclaiming yasss this and yasss that. The a-to-s ratio is still hotly debated—is it more than one a? How many s's? Refinery29, in 2013, tried to explain the phrase to those who were not in the know: "It is both a noun and an adjective. One does not do yass, they are yass; one embodies it, lives, and thrives! Ladies, yass!" If you watch Broad City (and shut up if you don't because you need to GET ON THAT), you are very familiar with this term already.

Definition: An vague expression to describe how you feel about a certain topic and to denote a wanting/understanding of everything covered by that topic or category

As far as we can tell, this was first used in 2010 in a (truly phenomenal) cartoon made by Allie Brosh titled "This is Why I'll Never Be An Adult," wherein one image featured a character saying: "Clean All the Things!" That was then made into a meme, and, well, here we are today.

Definition: A subtle diss that you "throw"

Used in a sentence: "Did you see that text?" "That was some shade."

The phrase "throwing shade" has been around since the 1980s, with one of the earliest explanations of the phrase appearing in Paris Is Burning, a 1990 documentary about drag balls. "Shade is, 'I don't tell you you're ugly, but I don't have to tell you because you know you're ugly,'" explains Dorian Corey. It may beg the question...but it also kind of makes perfect sense?

Definition: A phrase or request to stop activity or talking

Used in a sentence: [after someone does something annoying] "Can you not?"

The earliest entry for this phrase is 2005, and that's really all we know. If you're going to ask us more, just, can you not?

Definition: A term to describe fictional characters you want to be together (often paired with a mashup of the two characters' names); derived from "relationship."

Used in a sentence: "I love them. I'm totally shipping ChrisLex."

The phrase has been around since the '90s, and derives from "relationshipper." Then, however, both terms were used interchangeably. In 2004, a LiveJournal blog named "The Shipper's Manifesto" was a place where users could share essays or fan-fiction about their favorite should-be-together characters. It's now just everywhere—with many memes taking over your Tumblr pages and YouTube videos dedicated to a "ship." (Both will have you delving into the darkest corners of the internet, so goodbye forever.)