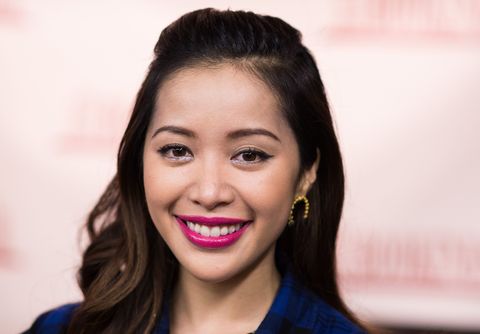 Meeting YouTube makeup phenom Michelle Phan is like meeting a motivational speaker, business entrepreneur, and beauty advisor wrapped up in a petite, fashionable frame. She greets me at the Viceroy in New York to talk about her new "premiere lifestyle network" ICON, and the 27-year-old is all bubbly business in two seconds flat.

"It's amazing, seven years ago or eight years ago when I was on YouTube I didn't have any of these resources," she says. Now the "creator" (as she brands all those she works with) is a seasoned star in her own right, launching a cosmetic line, a beauty website, a book, a music platform, and finally, ICON—a network in partnership with Endemol Beyond USA that features curated content from digital influencers. The platform will be available in the U.S. and UK, and hitting Western Europe and Asia in the summer and fall.

I caught up with Phan to talk about how she defines a creator, how she's successfully launched the network, and what others can do to follow in her footsteps.

What made you want to create ICON?

"Eight years ago, if I wanted to do a YouTube video I broke out my camera and filmed everything myself and learned how to edit and kind of become a one-woman studio. But we're living in an era now thanks to ICON, where any creator who is online, they can create in their own space. And I really believe that the Internet has completely changed the marketplace and made it so broad and so large and massive, anyone can own a niche market and make millions of dollars. Like for myself, I do these beauty tutorials, and I have a very niche market, and a couple of years ago that could have meant 10K followers but now it could mean 10 million followers. That still could be considered very niche.

For example, there's this girl in South Korea. She has a very niche market and she only does on type of video—she eats in front of the camera. She has piles of food all around her, and she's very small—you would never guess she would eat all that food, but she does. And she's just talking while she's eating. She's talking, talking, eating, eating, and I have no idea why but I found out from a friend that many young people in Korea they go home really fast to eat, and they just want a companion, they want to listen to someone and relate to someone while they eat. So it becomes a routine for them. And millions of people watch her.

"Anyone can own a niche market and make millions of dollars..."

And so sometimes, it's about understanding that even though it might not be for you—you know, someone out there is going to watch it. It's called the World Wide Web for a reason. Not everyone wants to watch the same thing. That's why I'm so excited about producing our premium content for the digital space, because I really believe we can produce and create new ideas and there's always someone out there who's going to love it and watch it and really bond with the creator."

What are your plans for the types of shows and projects you'll be creating? What do you want to do?

What does a "premiere lifestyle network" really mean? What are the topics you'll be including?

"Everything in the lifestyle world. Lifestyle has millions of facets—you can be a mommy blogger, you can be a daddy blogger—we don't discriminate. We have men and women on board because we believe that lifestyle stems through all genders, all ages, all races—as long as you're a good storyteller, you have a great idea, and you have something beautiful and amazing to share we will bring that to life and to fruition."

When did this idea percolate?

"When Google reached out to me in 2011, they wanted me to build out their female lifestyle vertical, when they were starting with that initiative they were giving each production house a million dollars to produce content. And a million dollars sounds like a lot, for one person it's a lot, but if you're producing content for thirty people it's not a lot. It was called FAWN: For All Women Network. And we launched it with Google. It was one of their most successful verticals and that's why in the second year they funded us again, but we needed more support and more resources—a million dollars wasn't enough to produce all of these shows that they were asking for. I felt like FAWN was such an amazing idea but we needed to do more for the viewers.

So I met with Will Keenan, president of Endemol, and told him what I was going through and how I wanted to up the quality and gain more resources and help the backend of FAWN and also to widen the marketplace so that FAWN wasn't just a place for women, but for men, too. I wanted to rebrand and revamp it and give it a new rebirth. And he said, 'let's do it.'"

Why launch it now?

"I knew that 2015 was the year for digital. Because now a lot of advertisers are finally seeing the power of digital, they're understanding and they know that Millennials and Generation Z, they don't watch traditional TV as much anymore. If they're watching TV it's as a second screen, they're on their phone or tablets and they're consuming content and engaging with content that way—whether they're on social media or YouTube or scrolling through Vine—and that's why we're going to do both. We're going to do TV and digital content, and they're going to complement each other."

You have so many things going on. How do you keep it all going?

"I have an amazing team. A lot of people think I have this huge entourage, I don't. I have only four people on my team. Well, another that is part-time. A part-time assistant, a production manager, a fulltime editor, fulltime director of photography, and I have a fulltime advisor now, who I just recently brought on board. Before that, I had managers, but that just didn't work for me. I'm the type of person where I just don't really need to be managed, I don't want to be managed and I fell into that because I was told this is what you're supposed to do—you need to have a manager and you need an agent and this and that, and I did all that, but I felt boxed in. I said, you know what, if I want to explore what digital has to offer, I have to break these rules down and I have to pave the way and I have to see what is a better map for other future creators, and so I've been mapping this out, and I know exactly now what type of infrastructure any creator should really have: You just need a good lawyer.

How do others follow in your footsteps? What are the ways in which someone can become a creator?

"Research, research, research. Research is the key. See what's happening out there in the marketplace. See what is needed, what void could be filled. Seven years ago, there weren't any beauty tutorials on YouTube, if you wanted to learn how to apply makeup you went to a beauty counter where they pushed products on you and you would feel guilty, and I know they have to make money but still, sometimes a college girl she can't afford a $50 mascara, she just wants to try it out and see how to do a smokey eye without having to buy products. Beauty tutorials were inaccessible back then, but now a five-year-old could learn how to do a smokey eye. It's that crazy. It's changed so much."

It's called the ICON network, so I have to ask, who is your icon?

"Elon Musk is an entrepreneur I admire. Nikola Tesla was someone I really adored growing up and learning about his story and how tragic it was, he had all these amazing ideas but again, he didn't have the right advisors and the right support group, so that's why it's important to have those and to know your history. I read a lot of history and I know that it's important because it can give you a better understanding of your own position."

"There is no such thing as one-size-fits-all beauty."

Ultimately, what's the purpose of this network?

"You know, my followers, they inspire me. These girls who are normal, they just want to live a normal life but they want to feel beautiful and they want to feel wanted, and needed. They have amazing stories and amazing skill-sets to offer to the world but they feel like because they don't look like Victoria's Secret models they're not worthy. I want to change that. I want to show them that there is no such thing as one-size-fits-all beauty. Everyone is uniquely beautiful. We're like fingerprints. And we all have something beautiful to offer, and this is why I wanted to build something like ICON. "

How to Be a Twentysomething CEO