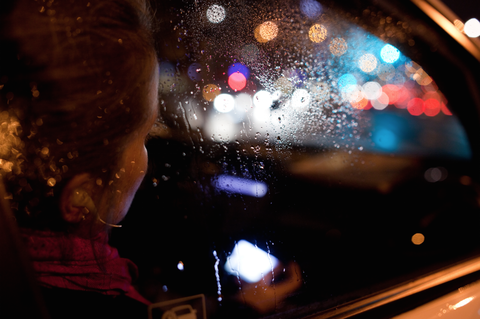 Periscope, for those of you who haven't played with it yet, is a lot of fun. It's interactive and silly and insightful and all the things an exciting new app launch is.

But it's also potentially life-saving.

Lofty claims for an app most early adopters are using to broadcast their coffee runs and dog walks, I know, but there's a real, serious application here. Imagine you're one of the thousands of women who feel unsafe every day, whether walking home at night or sitting in the back of an Uber or at a rowdy frat party. As the news reminds us on an almost daily basis, women are constantly abused, assaulted, and taken advantage of in situations like these. Usually at the hands of an aggressive, power-tripping man. One who chooses to believe he deserves control—and takes it.

In livestreaming apps like Periscope, I see an opportunity for us to take it back. Perhaps it's preventative—if your driver starts veering into territory that makes you nervous, and you're starting to fear what he might do, a geotagged broadcast could flag emergency response to find you and get you out. Or maybe it's defensive—the frat guy starts to get physical and you put him live, on camera, on the spot.

It's too soon for there to be any proof of this at work in the real world, and I truly hope there never is. But if it makes women feel just a tiny bit safer knowing they've got this in their pocket, we're one step closer to the world we all want to live in.

A Step Forward in the Fight Against Rape: New York Police Open a Sexual Assault Hotline for Students

Infuriating News of the Day: Women with Disabilities Are More Likely to Be Raped

Jessica Pels Editor-in-Chief As the editor of Cosmopolitan, Jess oversees the editorial for all of Cosmo's efforts across print, digital, video, and emerging platforms.
This content is created and maintained by a third party, and imported onto this page to help users provide their email addresses. You may be able to find more information about this and similar content at piano.io
Advertisement - Continue Reading Below
More From Culture
53 Wild and Completely Iconic Vintage Porn Films
Dale Moss Is a Super Important 'Bachelorette' Star
Advertisement - Continue Reading Below
It's Been a Weird Year for 'The Bachelorette'
Political Books to Read Ahead of Election Day
The Sexiest Movies on Amazon Prime
HBO Is Giving Fans 2 Special 'Euphoria' Episodes
What to Know About Tayshia's 'Bachelorette' Cast
Clare Crawley's 'Bachelorette' Cast Is Out
Lessons From Frida Kahlo in Embracing My Culture
19 Documentaries on Netflix to Watch Right Now