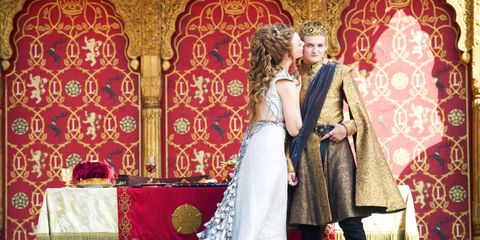 It's not an exaggeration to say that I love Game of Thrones more than I love certain family members. (Sorry, aunt who once gifted me a toothbrush for Christmas.) It's why god gave us Sunday nights.

That said: I don't exactly love it enough to read the books. Really, I don't love anything enough to read 864 pages. So, as someone who's admittedly clueless, here's what I hope comes next. Spoiler alert: It's winter. Winter is coming.

1. Arya Stark continues kicking (really, killing) more ass. Kind of a no-brainer since we last saw her killing The Hound—also killing our dream of a buddy comedy starring the two of them—and was on her way to Bravos to find her friend with no real face and very real blonde highlights.

2. Same goes for her sister. Sansa Stark is owning her evil twin makeover—dark hair, darker clothes—and we'd like her to use her newfound manipulation prowess to seduce her creepy guardian Littlefinger and kill him right before anything sexy happens. To avenge her father's death, and because we don't like how he looks at her. (Yes, he did save her life but he was the one who put it at risk so I don't want to hear it, Littlefinger-truthers.)

3. Brienne of Tarth finds them both. And they have their own Charlie's Angels-esque spinoff. Also, if you could quit with the OMG-you're-so-big-and-tall-like-a-man jokes that are lobbed her way, we'd appreciate it.

4. No more weddings.* My heart can't take this shit. Pro tip: Never go to a Westerosi wedding unless you plan to kill someone, in which case, you'll fit right in if you don't die first.

6. Cersei Lannister vs. Margaery Tyrell. Here's what's so great about their rivalry: They're better at the game than all of the guys combined. These two don't need to wage any wars, or squish any heads like grapes—they play with their wit, their cleverness, their wicked smarts that everyone else underestimates. And they've met their match in each other.

7. In the end, Cersei wins. She is the queen, after all. Cersei is totally misunderstood: She isn't given the power or respect she truly deserves because she's a woman, her kids have been ripped away from her, and the only love she's ever known is from her twin brother. Yet she still manages to play the game better than most and look damn good while she does it. Those eyebrows! :::SWOONING::: I hope she lives happily ever after with an infinite flow of red wine. (Book nerds: Yes, I've read all about the Walk of Shame that shut down production in Croatia last year—can't I live?!)

8. Margaery's grandma Lady Olenna Redwyne continues her lessons in shade-throwing. But that no one—spoiler alert if you're behind—finds out that she's the one responsible for King Joffrey's death.

9. Reek does something, anything. After he botched his own rescue attempt last season, we've lost the ounce of sympathy we ever felt for Lily Allen's baby bro. Fight back! Or at least stop shivering.

10. Jon Snow gets somewhere warmer. I mean, he successfully defended The Wall during last year's epic battle scenes—give the boy some sun!

11. Everyone realizes that Daenerys Targaryen is terrible at her job. She's not good at ruling, you guys! You're all being blinded by her flawless icy blonde hair. She conquers because other people do all of the work and then everything goes to shit because her dragons eat innocent people. She doesn't implement any structure in the cities of newly freed cities she rules over, so chaos ensues. Listen, I'm not asking for a bloody revolt or anything. Just do better, girl.

12. Tyrion Lannister lends her a hand. He arrives safely to wherever it is he lands with Lord Varys (related: allow me to blow your mind) and he knows Dany is alive and he's gotta do something badass because that's how this works.

13. Speaking of badass…the Sands Snakes! The bastard daughters of Prince Oberyn Martell are pissed about their dad's death (duh) and we hope they take no prisoners.

The Emotional Stages of Watching 'Game of Thrones'