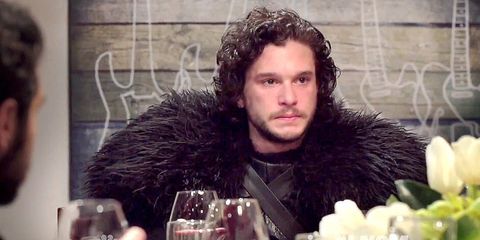 Kit Harington's Grumpy Cat face is officially off-limits now, but that's okay, because now we've got another endlessly entertaining subject to talk about: how Jon Snow and Seth Meyers are secret CrossFit buddies who sometimes attend disastrous/spectacular dinner parties together.

On Monday's episode of Late Night, Meyers invites his wintry Northern friend over, where, when he isn't hulking in the corner still wearing his gloves and fur overcoat, he's relaying his tragic family history, lamenting his girlfriend's violent death, and miming Joffrey's poisoning. So, you know—success!

The charades part makes the already-hilarious sketch, so make sure you stay until the end. Watch the clip here.

Kit Harington Wants Us to Stop Talking About His Sex Appeal

Girls Run the World in the New 'Game of Thrones' Trailer