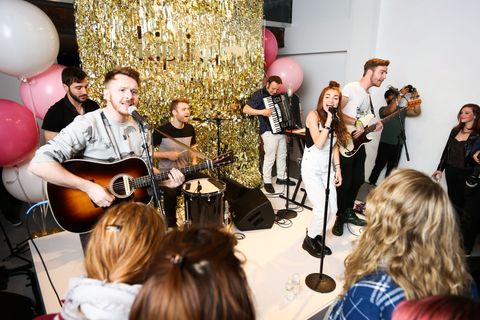 If you're looking to kick off a whole movement around joy and generosity, there's no better band for the job than MisterWives, the five-piece, New York City-based ensemble that pumps out poppy, infectious dance tunes you can't help but do '80s aerobics moves to. (Full disclosure: I've got a whole choreographed routine to "Reflections.")

Before their set Wednesday for #KiplingMakeHappy, the handbag and accessory brand's new initiative, we sat down for a warp-speed interview with the tree-house-building, pun-making pals.

How much fun was it filming the video for "Reflections?" I can't stop watching it.

Mandy Lee: "Aw, thank you. That felt like summer camp and it was our first legit music video, so we had the best time ever."

That whole atmosphere of "school's out" and rebellion—that feeds into your music a lot, doesn't it?

Lee: "Yes, rebellious music all the way. We're a rebellious, silly band. The song is about heartbreak, and we didn't want it to be a cliché, boy and girl fighting, crying—which is a lot of the video treatments we got—so we came up with this idea. A lot of people wanted shattered mirrors and things like that, but that was too literal. So this was a very loose interpretation of feeling like you're trapped in heartbreak: It's the last day of school and everybody's free, but you're stuck in detention."

We really appreciate the wordplay on "sister wives." Were there any other names in the running?

Lee: "Will had a real close call—it was almost a tie."

Will Hehir: "I had booked a show at a pretty horrifically terrible event venue—the worst dive bar in the world—and they wanted a name. At the spur of the moment, I came up with the name "24-Hour Party People." We played a show as the 24-Hour Party People, which is what we're about, definitely, but I don't know as a band name. It's harder to chant than MisterWives, so we decided to opt against it."

How did you come up with the animals for each person on the cover art for Our Own House?

Lee: "Those are actually our real spirit animals that we already had before the band, and they're coming out of the tree house, which is what Etienne built back in high school. And I wrote the whole album in that tree house."

Hehir: "I love dinosaurs. I have since I was a kid, so that was a natural fit for me."

Etienne Bowler: "I'm a drummer, so an octopus, obviously, made sense with the many arms and tentacles. And my name is Eight-ienne, so that's fitting."

Lee: "And he was born in Oct-ober. I've always loved elephants. I was called Dumbo as a kid. I kind of grew into my ears, but they were very big. I just find them to be the most fascinating creatures, and they're very loving."

Marc Campbell: "I'm the hummingbird because I'm constantly leaving things, and I have to retrace my steps all the time. The hummingbird is the only bird that flies backwards."

"Hurricane" goin' up on a Tuesday, if you pre-order our album...hooray! -Drake💃🎉http://smarturl.it/MWHurricane

Mandy, I watched an interview with you where you said your first YouTube video was a mashup of Nicki Minaj and Katy Perry. Any other memorable early performances?

Lee: "I was 15 at the Bohemian Hall and Beer Garden in Astoria, and people thought I was Feist. The fliers, my mom still has one, was this awkward MySpace photo of myself like, 'Mandy Lee and Company.' And my brother played drums, and I sat at a piano with my legs crossed in a dress—very different show from what we play now."

On social media, you're always so energetic and fun—in person too. How do you keep so upbeat? What's your secret?

Lee: "And it's just what happens when you're with your best friends. We're a family, and we really love being together. It's kind of obnoxious how well we get along."

I Had to Convince John Hughes to Give Me the Part: Molly Ringwald on 'The Breakfast Club,' 30 Years Later

Elizabeth Banks Took Her Alexander McQueen Shoes from the 'Hunger Games' Set Because Who Wouldn't?

With Her New Lifestyle Network, Michelle Phan Is Now Officially Taking Over the World