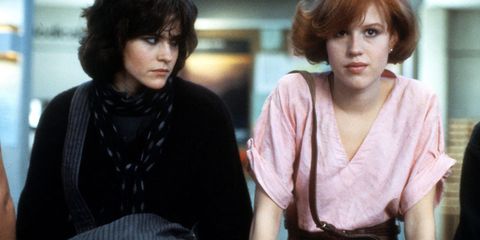 Who didn't want to be Molly Ringwald and the characters she played growing up? From her iconic red hair to her dance moves to the sweet guys who pick her up in red cars because they FINALLY figured it out, those '80s John Hughes moments were the ultimate imagining of who we could be.

It's unreal to think that The Breakfast Club came out 30 years ago. And even more unreal to turn back and fully see the massive cultural influence it left in its wake. In honor of the anniversary, and the release of The Breakfast Club 30th Anniversary Edition on DVD and Blu-ray (and even in select theaters this week), we had a candid chat with its star.

The Breakfast Club is one of those movies that still feels completely relatable and fresh. Why do you think that is?

"Well, I think mostly just because all of the issues that the characters are still very much felt today. Even though the technology has changed, the way that people communicate has changed, essentially what they're feeling has not changed—this idea that 'I don't belong' or 'Do I belong?', 'Do people like me?', 'I'm different.' I think that's why it still speaks to people. It also just has this special, unnameable thing. There's a sort of charisma and everyone got along really well and it all just came together.

I also think that the fact that we all have only one outfit helps. [Laughs] It doesn't feel as dated. If we had changed a bunch of times, at some point it would have gotten very, very '80s. But I look at the movie and I'm like, I would still wear what I wore in the movie. So I think all of that combined really managed to help the movie keep its relevance."

"What they're feeling has not changed—this idea that 'I don't belong' or 'I'm different.'"

It's been said that you were asked to play the character of Allison, but you wanted Claire. What was the thought behind that? Why Claire?

"I had just finished doing Sixteen Candles, and that character of Samantha is very much kind of self-invisible. And she was also a bit of my personality, too—this kind of weird, different girl that definitely wasn't the popular one. And when they approached me about the character of Allison, I just felt like that wasn't very much of a stretch at all. I wanted to play something that was different; I wanted to play Cathy. Because, in the original script, my character's name was Cathy. They were originally going in a different way, I think actually it was Robin Wright that they had in mind. And I had to convince John, who had to get the okay from the studio for me to get the part. And he did."

What made you want to change the character's name from Cathy to Claire?

"Cathy was a very common name at the time—every other girl was named Cathy. And there's one line where my character says her name is a family name. And I thought Claire is so much more believable as a family name, because it was more uncommon at the time. It was also just pretty and feminine, and fit the character better."

There was an entire scene ad-libbed and you yourself once said Hughes was open to improvisation. Do you remember improv-ing any of your lines?

"We definitely did improv throughout the whole thing. Though the part where we talk about getting detention was in the script. The scene where we get high, that was a lot of improv. The part where I say 'I'm so popular,' was partially ad-libbed."

What do you think your characters would be up to now?

"[laughs] Well, Ally Sheedy definitely thinks Allison would be a writer, but I think she'd be some sort of performance artist. I feel like my character probably would have followed the path she was on for awhile, dating those bad boys and probably with a few unsuccessful relationships under her belt. I kind of like the idea that eventually she ended up with Brian somehow. You know, once he made a fortune off the internet. Because you know that's what happened to him."

You've said before that Pretty in Pink was one of your favorites. Was The Breakfast Club up there in terms of filming, too?

"The Breakfast Club was definitely one of my favorites. Sixteen Candles was great to film since it was summer vacation, while this one was the filmed in the middle of winter and I had to go to school. Not quite as fun [laughs]. But I think that they're all good films. As a piece of art, this one was really kind of John Hughes, it was personal for him. It took the most risks."

You know, being such a fan of Hughes' films—it seems like Some Kind of Wonderful is pretty much the gender inverse of Pretty in Pink, with the Duckie character finally winning out in the character of Watts. What do you think?

"You know, they offered me Some Kind of Wonderful and at the time, for me, it was a little bit too similar, in a way. But I don't know, I also…I didn't quite believe it in the same way. A lot of times John I think was creating these LGBT characters, without really having the vocabulary for them. I think if you look at the drummer girl Watts in that movie, if you were to write that character now, it's kind of obvious what the deal is. So, for me, the movie lacks this authenticity that the other films don't. But I didn't do it because it was in the same wheelhouse as everything I had done. And I just…I wanted to do other films that weren't me being a teenager. Not to say that I didn't want to work with John again, I definitely did. But I was ready for something new in terms of character."

"John I think was creating these LGBT characters without really having the vocabulary for them."

Did you take anything from the set after filming?

"You know, I probably have some stuff, but I've moved so many times that who knows where anything is. I think my mom would probably have more. I did have these amazing mix tapes that John made for me, and I really wish I knew where those were. He apparently had given everyone a piece of the bannister in the movie, but I have no idea where that could be. I do have a lot of great memories."

Who were you closest to on set?

"Honestly, I was closest to John. We spent a lot of time together. The boys [Emilio Estevez and Judd Nelson] were older, except for Anthony Michael Hall, so I couldn't really join when they were out carousing. Allie was on much more of a health kick then, so yeah…we hung out on set and we all got along, but we didn't spend a ton of time together off set."

What's going on now—what projects are on the horizon?

"I'm doing a lot of stuff right now...I have Jem and the Holograms coming out, and I also have another movie Bad Night coming out. I have a jazz group that I sing with—we're signed to Concord Jazz which is really cool. I'm writing a column for The Guardian and I'm working on a third book."

You dyed your hair blonde recently and it looks amazing. What made you want to change it up?

"I just wanted to do it for a bit—it's been fun. I'm actually thinking I'll change it and make the switch to strawberry blonde. Or maybe back to red. My hair's naturally auburn with red tones. But I don't know—we'll see. Blonde is just a lot, unless you're married to a hairdresser, which I am not. [laughs] And I feel like every time I change my hair I feel like I'm turning my back on my people. I gotta represent."

Editor's Note: Ringwald switched to strawberry blonde right after our interview, and as "her people," we're feeling pretty good about it.

We Threw a SXSW Party to Celebrate the 'Veep' Cast, and Here's What Happened

5 Things You Missed in 'Ferris Bueller's Day Off'