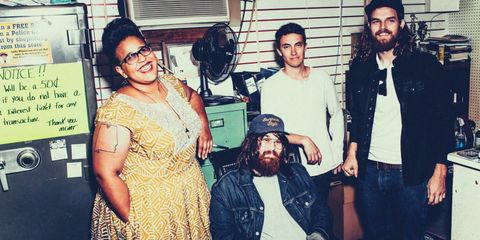 Fact: Alabama Shakes' frontwoman Brittany Howard's voice is unlike anything you've ever heard before—it's better. And, lucky for your earbuds, it's back. See: The band's sophomore album Sound & Color, which drops April 21. We rang up Howard for MC's May issue to talk fighting, binge-writing, and that voice.

"The whole writing process was totally backwards. Usually, a song comes all at once, but this one started with just the instrumental; I never write songs like that. The mood felt passionate and infuriated, so I wrote about what I saw around me: Everyone is kind of fed up with the way things are. You're working as hard as you can, but you can't get ahead; the more you give, the more people take. I see my friends and family go through it, and I wanted to say something about that."

Part of your process is "binge-writing," right?

"Yes, I really like to come prepared with something we can work on, so beforehand, I sometimes go in my basement and write for five or eight hours. I could take breaks, but the thing is, there's a possibility I might not go back down, so I work through the day. Afterwards, I'll eat dinner, go to sleep, then do it again the next day."

Which track was the hardest puzzle to solve?

"Future People" comes to mind, because it mixes all these different genres. I'm glad we didn't scrap it. To me, it's like a dreamscape; it's so bizarre. We really searched and worked on that one. We recorded it three times before we liked it. Once we found the tones we were responding to, we listened to it and said, "OK, we like it." It took a while.

What's it like to be the only girl in the band?

"It's not something I'm conscious of. We're just personalities floating around, trying to get along—and we do. The band's my best friends. I get to share the creative part of myself with them."

It sounds like you might have three different singers trapped inside one body—how do you keep all those voices in shape?

"I have no idea—it's a miracle. I drink a ton of water a day and try to get as much sleep as possible. Sleep is the best way to restore your health. Never skip on sleep, it's crazy important."

A version of this article appears in the May issue of Marie Claire, on newsstands now.

6 Minutes with MisterWives, the Happiest Band on the Planet

We're in the Band: Meet HAIM

Advertisement - Continue Reading Below
More From Culture
The Music Podcasts We Keep Pressing Play On
Why You Keep Seeing "Until Tomorrow" on Instagram
Advertisement - Continue Reading Below
The 19 Best Murder Mystery Movies
How to Join Marie Claire's Online Book Club
'In Five Years' Is MC's April Book Club Pick
'Little Fires Everywhere' Is a '90s Time Capsule
How Murtagh Dies in the Outlander Books
What Happened to John Finlay From 'Tiger King'?
'Outlander' Season 5 Is Back to the Show We Love
The Best Cooking Shows on Netflix