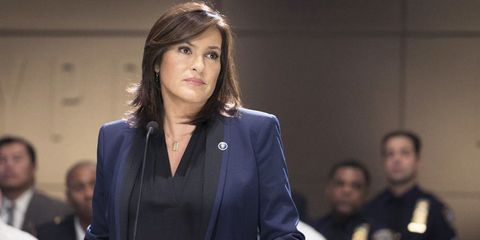 Further underscoring its notorious responsiveness to real-life news, Law & Order: SVU will air an episode about a transgender teen fresh off the heels of Bruce Jenner's 20/20 interview.

According to the Hollywood Reporter, Warren Leight, showrunner of the ceaseless police procedural, confirmed the storyline for season 17, which begins in the fall. It's not the first time the show has featured a transgender teen—an episode in 2009 featured a trans 13-year-old and a ring of thieves that stole hormones from pharmaceutical companies. But this one will doubtless garner more attention, now that Jenner has helped put transgender issues on the map.

While it's just one episode with just one trans character (who will, most likely, play the victim), at least his or her story will reflect what we're talking about today. Like Shonda Rhimes said, TV should be made "like the world looks."

Hilary Swank on Transgender Acceptance: "We Have a Long Way to Go"