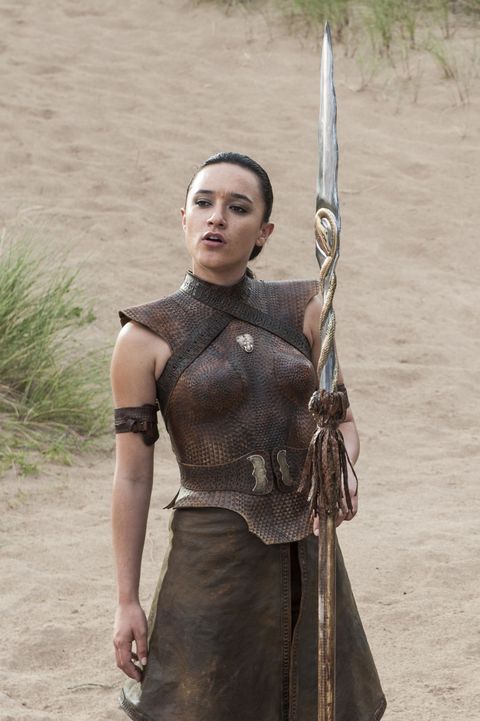 Welcome, Obara, Nymeria, and Tyene Sand—the newessssst badasssssss women of Game of Thronesssss. (Get it? Sand Snakes, you guys.) We briefly met the pissed-off daughters of the late Oberyn Martell on Sunday's episode of Game of Thrones and, well, they're The Best. They fight, they torture jerk ship captains, and they only care about one thing: revenge. Which they plan on seeking, along with Ellaria Sand, on poor little Myrcella Lannister.

Keisha Castle-Hughes plays take-no-bullshit oldest sister Obara—here, she tells us what we can expect from these goddesses. And then we imagined a world where they were BFFs with Arya Stark and everything was perfect.

Marie Claire: So we got a glimpse of Obara Sand is Sunday's episode—and we're dying to know more/everything.

Keisha Castle-Hughes: "Obara Sand is the eldest of all the Martel's daughters, the Sand Snakes. She's a warrior monk, which means that she meditates on her actions as much as she kills people, which sounds like it doesn't work at all, but in Dorne, it makes perfect sense. She wields the same weapon of his father, Oberyn Martell, the spear, which is the Dornish weapon as well. She takes great pride in who she is and where she's from, and although she comes across initially as like she's quite emotionally unavailable, and cold and stern, it's not like she doesn't feel anything. She's just very controlled with her emotions. She's taking the death of Oberyn very hard—she cried a lot of stoic tears over it. She's grown up with her father who spent his entire life waiting to avenge the death of his sister, and so this is what she knows: If you lose a family member at the hands of someone else, they must pay."

KCH: "We nicknamed her 'drama Obara.' She loves the sound of her own voice."


MC: The female characters of GoT wield the least power (technically) in this fictional guy-dominated society—but the women actually seem much stronger. How will the Sand Snakes fit in?

KCH: "Absolutely! I mean, we could have a whole other discussion—but what I'm most excited about is that we haven't seen women who work together—the only other kind of sibling relationships we've seen were Sansa and Arya who when they were together were extremely cruel to each other and had very different outlooks on how each other should behave—like this. These three girls are all very supportive of each other. These are the general sibling stuff that exists, which was really important for us three as actors to play because we wanted them to be real people. Of course they are going to be annoyed with each other. Like the youngest sister is going to irritate the eldest, and Nymeria and Tyene fight a lot, but when it comes to fighting for the common cause of avenging their father, they are still all on the same page. At this point, Obara would literally work with anyone who would avenge her father's death."

MC: But is it fair to go after Myrcella since she's totally innocent?

KCH: "Oh, absolutely! I think of the three, Obara is the least concerned with the details. Obara is just like, An eye for an eye however it happens."


MC: What kind of fight training did you do to prepare for the role?

KCH: "From the get-go, I started studying the martial art of Wushu, which really lends itself to that concept of Obara being a warrior monk. So much of martial art is about the physicality as it is about your state of mind. Because she is a very stern and hard character, it was really important that in playing her that she didn't come across as just cold and dead inside. There was still a person in there. And an inner peace; all of her decisions come from the right place. And so Wushu was a huge help in that."

KCH: "In my ideal world, I would really, really love to see the Sand Snakes work with Arya Stark. That would be the most badass combination, and it would make so much sense. Definitely not a Lannister."


MC: So, without ringing the spoiler alert alarm, what can we expect from the Sand Snakes this season?