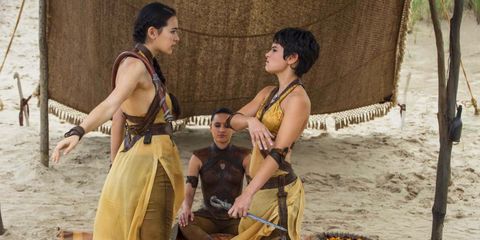 1. Get rid of people you don't want around by sending them on vacation.

What Happened: Cersei Lannister continued to clear out the small council by shipping off Lord Mace Tyrell to secure a loan in Braavos. Bon voyage!

The Lesson: Banish unwanted people to remote regions of the world by sending them on "business trips." Now that Lord Tyrell's out of the picture, Cersei's round table consists of mad scientist Qyburn and pushover Grand Maester Pycelle. The Cersei dictatorship begins.

2. Control your lovers by denying them sex.

What Happened: Margaery Tyrell's brother, Ser Loras, was imprisoned by the Sparrows. (Hi, Cersei.) Tommen Baratheon tried—and failed—to have him released. Still, the little king asked if Margaery would be returning to their chambers later on. She was like, "Nah."

The Lesson: Withholding routine baby-making sessions is a quick way to put your man in check—especially if he's the king and religious zealots are pushing him around and his mom just won't quit.

What Happened: Selyse Baratheon continued to resent her daughter Shireen, because of that Greyscale disfiguration thing.

Lesson: People with bad skin can't be loved. It's just not possible.

4. The boob is a powerful weapon of persuasion—but sometimes not powerful enough.

What Happened: Melisandre tried to talk some sense into Jon Snow by de-robing and getting him to cop a feel. Ultimately, it didn't work: Jon chose to remain at Castle Black instead of helping Stannis Baratheon take back the North.

The Lesson: A strong-willed dude cannot be broken by breasts, no matter how much the Lord of Light blesses them. Melisandre was pretty damn close, though; mama needs another evil shadow baby!

5. Even if you've been disfigured by a dragon-like skin disease, you'll always be daddy's little girl.

What Happened: After Selyse told Shireen that she didn't want her to come to Castle Black, the sweetest little girl in Westeros went to talk to daddy. He said, quote: "Haters can suck it, kid."

The Lesson: You may have contracted one of the deadliest diseases in the world, leaving your skin looking like dragon scales, but it's all gonna be just fine—daddy loves you!

6. Sometimes it's totally cool to trust a Slytherin.

What Happened: Sansa Stark calmly bid farewell to Littlefinger at Winterfell, knowing that Stannis Baratheon would be arriving soon to tear shit up. According to Littlefinger, this will make Sansa the wardeness of the North.

The Lesson: Human snakes generally can't be trusted, but when you're on the same team, don't worry. Sure, they may have ulterior motives and wish to wed you down the line in hopes of co-ruling the North and fulfilling some sick fantasy, but at least they've got your back.

7. Train your children to become merciless warriors that will avenge your death. It's good parenting.

What Happened: Ellaria Sand and her later boo Oberyn Martell's daughters, the Sand Snakes, plotted to start a war with the Lannisters.

The Lesson: Life insurance is great and all, but it's way better to have your deadly progeny waiting to take out your killers. For best results, train them to wield knives, spears, and whips.

8. If the people want fighting pits for a second episode in a row, hold steady and don't give them the fighting pits.

What Happened: Daenerys Targaryen continued to ignore the public's cries for re-opening the fighting pits. That pissed off The Sons of Harpy even more, so, naturally, they ambushed the Unsullied.

The Lesson: When you are a guest in a foreign land, ignore their oldest traditions, no matter how many riots (or multiple-episode-yet-simultaneously-boring-story-arcs) your stubbornness starts—it's a great way to make friends.