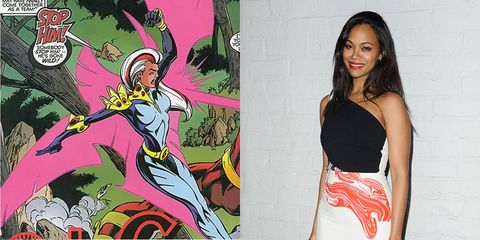 There are so many female superheroes that haven't had their time in the limelight. And with new male-dominated hero films popping up left and right, we figured it's time to give the ladies their due.

Here, the Marvel superheroes we think should get their own movies and the actresses to portray them.

Hawkeye is a member of the Young Avengers, a highly skilled archer, fencer, and fighter. (Noticing any similarities?)

Is it just us or does this drawing actually look like Wiig? Plus, every superheroine needs a sense of humor.

Rachel Summers is the daughter of Cyclops and Jean-Grey. If you're not privy to X-Men mythos, that's a cross between laser beams for eyes and basically the most powerful mutant ever. It's only logical that former Hermione and current feminist would fill these shoes.

Songbird is the equivalent of a Banshee: beautiful but deadly and totally badass. Seems to describe Zoe perfectly. Her powers include using her bionic vocal chords to impede her enemies. Oh, and perfect pitch.

Also known as Shadow Woman, Sepulchre has the ability to manipulate dark energy and merge into the shadows. Kinda like Olivia Pope, no?

Sure she's already been one of the most maleficent (pun intended) villains out there, but it's never too late to turn towards the light. Ms. Marvel is essentially unbeatable. Who else other than Angie could be her? Interesting tidbit: A script for Ms. Marvel is currently in the works and slated to debut in theaters in 2018. This is a not-so-subtle casting request.

Frank Cho | Getty
Simedar Jackson I'm Simedar, an intern here at MarieClaire.com!
This content is created and maintained by a third party, and imported onto this page to help users provide their email addresses. You may be able to find more information about this and similar content at piano.io
Advertisement - Continue Reading Below
More From Culture
The Cast of Grand Army Are BFFs IRL
A Look Back at Princess Anne's Life in Photos
Advertisement - Continue Reading Below
Who's in 'The Queen's Gambit'?
'After We Collided' Stars Play Trivia With Us
'The Crown' Season 4 Is Coming So Soon
It's Been a Weird Year for 'The Bachelorette'
Who Plays Townes in 'The Queen's Gambit'?
The Best Korean Dramas to Get You Hooked
To Save Victims, We Must Dismantle Purity Culture
Will There Be a Season 2 of 'The Queen's Gambit'?