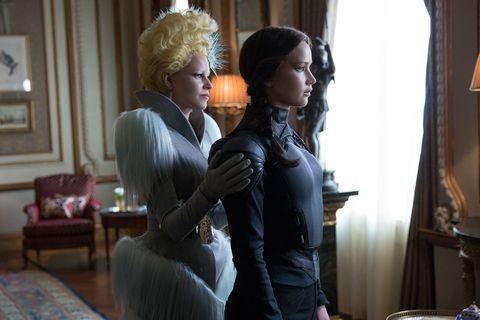 Update, 9/16: Even though it's just two minutes of mostly flashbacks, the second trailer for Mockingjay: Part 2 will still wreck you because of the sappy music and the sappy sisterly "moments" and the sappy feelings you'll get when you're reminded of how that relationship ends.

Visually, the clip looks fan-made (Tumblr was convinced of this when it leaked Tuesday), but when it comes to emotional manipulation, it is all professional.

A sister’s bond is forever. Witness the evolution of Katniss & Prim in #MockingjayPart2 – Tickets on sale Oct. 1st!https://t.co/DQNvrejqfS

Update, 7/23: Here is the official, heart-pounding, full-length trailer for Mockingjay: Part 2, which will make you feel slightly more alive than you did 2 minutes and 34 seconds ago. It's those jump cuts, man. And all the explosions.

Update, 7/9: In the new teaser trailer for Mockingjay: Part 2, Katniss stands on top of a Christ the Redeemer-size hand making that sign thing she does. She's also wearing this red catsuit.

Guys. Guys! After weeks of those booooring paper-cutout posters, the Hunger Games people have finally released the first trailer for Mockingjay: Part 2, which will blow you away with how intense it is. The score is epic. Game of Thrones's Brienne of Tarth makes an appearance in all her uber-tall, man-intimidating glory. There's some black sludge that turns into quicksand. And Katniss's voiceover = shivers.

November 20: officially given a gold star on our iCals. Watch the trailer above.