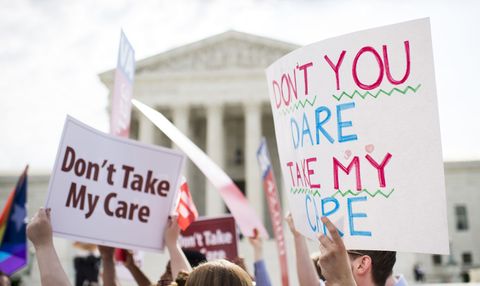 Update, 10:30 a.m.: The Supreme Court just handed down its ruling on the Affordable Care Act, and has effectively saved it. The 6-3 decision will allow 6 million people to keep their Obamacare coverage. (Mother Jones)

—Ezra Miller, formerly of Perks of Being a Wallflower and We Need to Talk About Kevin, is reportedly in early negotiations to star in the new Harry Potter spinoff Fantastic Beasts and Where to Find Them. (Variety)

—Quick-on-his-feet-comeback-thinker-upper President Obama scolded a heckler at a gay pride event yesterday, saying, "Hey. Listen. You're in my house." (AP)

—...which is kind of ironic considering news broke yesterday that the U.S. has been spying on the past three French presidents. France is, expectedly, irked. (Time)

—Transparent just got renewed for a third season with Amazon, and creator Jill Soloway has inked a deal to develop more shows for the platform. (The Hollywood Reporter)

—The Supreme Court is expected to rule on six major cases in the coming days, and they're biggies: lethal injection, Obamacare, and same-sex marriage are all on the docket. (Time) In a joint NBC News/Wall Street Journal poll, 57% of Americans want SCOTUS to rule in favor of same-sex marriage. (NBC)

—The Vanderbilt football players who were accused of raping an unconscious classmate have been released from jail following the judge's declaration of a mistrial due to juror misconduct. (AP)

—At his sentencing yesterday, where he was given six death sentences and 20 sentences of life in prison, Dzhokhar Tsarnaev apologized for the Boston marathon bombing. (New York Times)