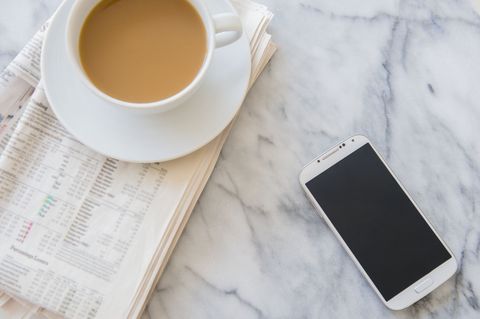 Update, 5:29 p.m.: Richard Matt, one of the two convicts who escaped from a New York maximum-security prison June 6, has been shot and killed by police, CNN reports. Officers are still pursuing David Sweat, continuing a three-week manhunt that has led law enforcement across upstate New York.

Update, 10:00 a.m.: In a landmark decision and a massive victory, the Supreme Court has overruled states' ability to ban same-sex marriage, meaning gay couples finally have the right to wed in all 50 states.

—H&M is working on a super-secret new brand/store concept to be launched in 2017, which CEO Karl-Johan Persson says "will be completely different from H&M." (Bloomberg Business)

—Turns out all those Netflix fears were unfounded—the movie-going business is alive and well, considering North American box office revenue just reached a record high of $5.3 billion year to date. (The Hollywood Reporter)

—Fifteen emails were missing from the files Hillary Clinton turned over to the State Department, meaning Email Gate is definitely *not* over and definitely *will* be trotted out again and again on the election trail. (New York Times)

—Today is the World's Ugliest Dog competition! Vote at your discretion.

—Following now-presidential-candidate Donald Trump's inflammatory remarks about Mexican immigrants, Univision is backing out of its deal with Miss Universe. (Variety)

Getty Images
This content is created and maintained by a third party, and imported onto this page to help users provide their email addresses. You may be able to find more information about this and similar content at piano.io
Advertisement - Continue Reading Below
More From Culture
The Top-Grossing Book-to-Movie Adaptations
Historical Films to Stream If You Loved 'Hamilton'
Advertisement - Continue Reading Below
A Look Back at Princess Anne's Life in Photos
Is Jack From 'The Circle' Cousin Greg?
Cristin Milioti & Billy Magnussen Play Trivia
The Most Unmissable Movies of 2021 (So Far)
Mother's Day Gifts to Show How Much You Miss Her
Get to Know Delessa From 'The Circle'
Movies That Just Feel Like Summer
Different Pride Flags and What Each Represents