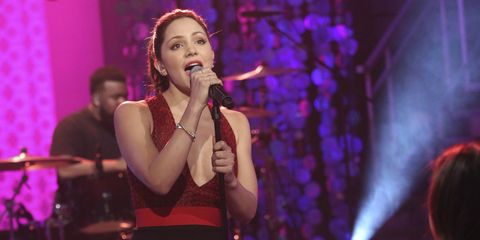 It's been five years, but fan favorite Katharine McPhee is finally making her musical comeback. The American Idol and Smash alum, who's now busy on CBS's Scorpion, is poised to top the charts again—and, fittingly, it's with an album called Hysteria.

From her collaborators—Sia, OneRepublic's Ryan Tedder, and Florence & the Machine's Isabella Machine—to the fiery lead single "Lick My Lips," the album marks a significant milestone in McPhee's career.

The latest track off the record, "Stranger Than Fiction," is an airy pop ballad that's full of last-gasp-of-summer energy. "This song captures a time where I was finding strength from independence, love, and faith from the most peculiar places—hence life is stranger than fiction," McPhee told us.

Lisen to the exclusive MarieClaire.com premiere of the feel-good ballad here, and look out for Hysteria, which drops next month on September 18th.