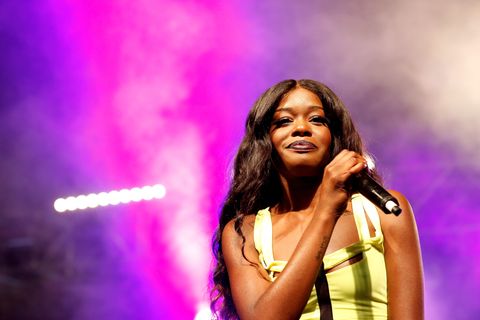 Entertainer Azealia Banks is not one to shy from a debate—in fact, her interviews and social media feeds are testament to the fact that Banks loves to question, remark, and shock fans and readers when it comes to, well, basically anything. ("I'm not here to be your idol," she once told Billboard, after being asked why it is that she loves to stir the pot so much.)

But her latest litany of tweets may have just stolen the show—and I'm still not sure what to make of them.

Some followers called her out for "running out of controversial topics," while others praised her for "exploring and thinking independently." For my part, I think suggesting a lifetime limit on abortions is yet another way to put a stranglehold on a woman's authority over her own body. And to the concern about "wilding," it's worth noting that only two percent of women ages 15 to 44 have abortions each year, with just around half that number having already had one previously.

This content is created and maintained by a third party, and imported onto this page to help users provide their email addresses. You may be able to find more information about this and similar content at piano.io
Advertisement - Continue Reading Below
More From Culture
Listen to the Best New Love Songs of 2021 (So Far)
'Bachelor In Paradise' 2021: Everything We Know
Advertisement - Continue Reading Below
Meet the Cast of 'Too Hot to Handle' Season 2
Meet the Cast of Katie's 'Bachelorette' Season
Simone Biles: "Don't Be Ashamed of Being Great"
68 Movies That Are Just Fully About Sex
Everybody Loves Annie
The Beachiest Beach Reads of All Time
This Summer, Let's Escape
Films That Pull Back the Curtain on Royal Life